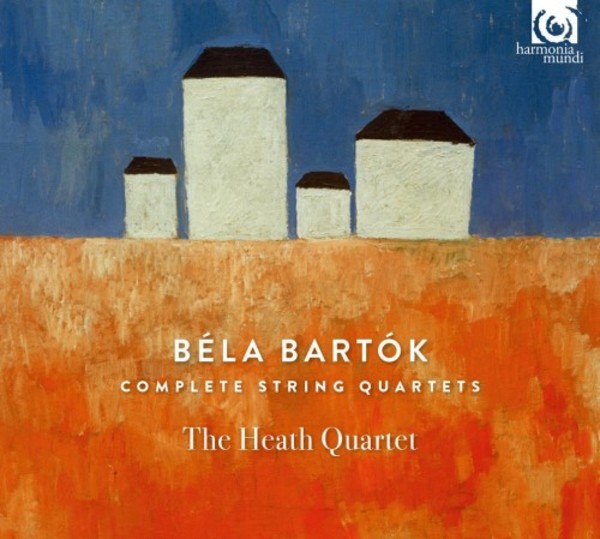 The string quartet was of central importance to Bartók throughout his career. His six quartets were written (between 1907 and 1939) at crucial turning points in the composers creative development. From the elegiac tone of Quartet no.1 (reflecting an unhappy love affair) to the sadness and wry parody of no.6, composed on the eve of World War II, by way of the mirror forms and atmospheric night music of nos.4 and 5, they represent perhaps the biggest interpretative challenge in the genre alongside the Beethoven quartets. A challenge triumphantly met here by the Heath Quartet. Future plans include complete cycles of Jörg Widmanns string quartets at Kilkenny Festival, Berlins Boulez Saal and Wigmore Hall, as well as numerous appearances at summer festivals in the United Kingdom and beyond. Their debut recording of Tippetts string quartets (Wigmore Hall Live) received widespread acclaim and won the Gramophone Chamber Disc of the Year in 2016. A subsequent release on Harmonia Mundi of Tchaikovsky Quartets 1 & 3 was selected as Disc of the Week by both The Sunday Times and BBC Radio 3.

an unqualified triumph ... as a former Tippett scholar I rejoiced at the gleaming new insights provided at every twist and turn of sustained arguments ... an essential set for any true music lover. - The Strad, April 2016

Russian interpreters have tended to dominate this repertoire in the catalogue, so its good to hear these outstanding young British musicians in still relatively neglected works...the Heath players pour out Tchaikovskys grief for his friend with a depth of tone and virtuosity  in the allegros  that matches the finest Russians on disc. A notable debut. - Sunday Times, 20 November 2016

Widely regarded as one of the undisputed pinnacles of 20th-century chamber music, Bartóks cycle of string quartets remain one of the greatest professional challenges for ensembles to this day. They boast an enviable discography which, historically, has been divided between the more lyrical approach adopted by native Hungarian quartets (such as the Végh, Hungarian and Keller Quartets) and a more aggressive, in-your-face, high-polish style from Western groups (Tokyo, Alban Berg, Emerson). More recently, the trend has been to find a middle way that marries the best of both worlds, as with the highly-regarded cycles from the Takács and Belcea Quartets. And, all the time, the challenge is to bring out the abundant variety as well as the consistent integrity of music that spans the whole of Bartóks mature career, from the late-Romantic soundworld of the First Quartet, through the expressionism of the Second, the formal innovation of the Third, and the edge-of-seat modernism of the Fourth and Fifth, to the unutterable sadness of the Sixth, composed on the eve of World War II.

Having recently given us an acclaimed cycle of Tippett quartets on the Wigmore Hall Live label, the Heath Quartet  formed in 2002 at the Royal Northern College of Music  now turn their attention to Bartók, again recorded at Londons Wigmore Hall, but this time for Harmonia Mundi (for whom they have already set down Tchaikovskys First and Third quartets). As with the Takács and Belcea ensembles, the Heaths find a thoroughly convincing middle way that brings out the innate lyricism of Bartóks writing while not shying away from the more forthright technical and expressive demands of the composers particular brand of musical brand of modernism.

Two things in particular mark this set as special: one is the entirely natural sound-picture, which casts just the right amount of spatial warmth around the players  producers Alexander van Ingen and Dave Rowell and engineer Chris Kalcov achieve remarkable result in the Wigmores often tricky acoustic. Allied to this is the quality of the sound produced by the players themselves: it has a remarkable grain to it, as if the wood of the instruments itself was speaking to us. This pays obvious dividends in the First Quartet, which has an almost period-instrument clarity to it without any of the HIP mannerisms that might imply. But even in the more mature works, the quieter passages (slow and fast) have an extraordinary transparency to them without any recourse to unnatural spotlighting. Try the opening of the Coda to the Third Quartet (helpfully given its own track) or the bulgarese Scherzo of the Fifth to sample the wonderful sounds the players conjure up.

As for the more assertive music, such as the Fourths opening Allegro or the same works Finale, there is no want of bite or spirit, yet nothing is pushed beyond the natural expressive or acoustic limits  something which occasionally mars the otherwise admirable Emerson cycle on DG. The Heath Quartet never forget that, even at its most apparently aggressive and Dionysiac, Bartóks music, with its manifold folk roots, is fundamentally lyrical in nature. In the Sixth Quartet, his eventual farewell to the genre (a Seventh was at the sketch stage at the time of his death), they bring out all the character of the second-movement March and the grotesque third-movement burlesque, while all the time keeping in view the overarching mournfulness of the recurring motto theme, which ultimately finds full voice in the elegiac finale, leading to a bereft ending which has still has overwhelming resonance.

To accommodate all six works on two discs, the odd-numbered quartets are placed on CD1, the even-numbered on CD2, which preserves a sense of progress across the cycle as well as a spiralling back which is not out of keeping with the music itself. With the Takács set now available only as part of a 32-disc Decca box set, and the Belcea EMI cycle currently out of the catalogue, anyone wanting an excellent set of these matchless works in up-to-date sound need look no further than these vivid new accounts. Its a tremendous achievement, fully worthy of a place alongside the great recordings of the past.

The Heath Quartet play each with an electrifying intensity, maintaining an irresistible impetus and negotiating abrupt character changes with aplomb.
The Sunday Times 4 June 2017

This is a major release. Last year I heard The Heath Quartet play Bartóks Third Quartet in concert, and was struck not only by their obvious mastery of Bartóks idiom but also by the exuberant sense of fantasy  indeed, joy  that they brought to the music. ... Newcomers to the Bartók quartets will find this a sincere, imaginative and splendidly played entry point; old hands will quickly find 101 new reasons why these extraordinary works rank among the supreme achievements of 20th-century music.  Richard Bratby
Gramophone September 2017

The young players of the Heath Quartet in this latest cycle yield little to any of their distinguished peers in virtuosity and formal grip. ... Maybe the Tokyo Quartet are more immaculately modernist in approach, maybe the Takács more earthily Hungarian, but overall this fine release should not disappoint.  Bayan Northcott
BBC Music Magazine September 2017

The true joy of this survey by the Heath Quartet, taken from live recordings at the Wigmore Hall, is the pungency of performances that capture the essence of Bartók, from the desperation of youthful, unrequited love in the First Quartet, to the anguish of the last, written as war loomed. There is a freshness and immediacy running through every performance  This is a substantial achievement by the Heath Quartet, which offers new insights into one composers fascinating body of work
The Scotsman 12 June 2017

Id call this a radical re-think of the Bartók quartet cycle  Where the Heath Quartet scores is in its flexible approach, and the ease with which tempos relate to each other, especially in the largely romantic First Quartet, a work that in the wrong hands can seem episodic
Classical Ear 9 June 2017

everything the critics enthused about at the time [of the Wigmore Hall concerts] is present and correct: the sense of music on the edge, performances impeccably prepared but surfing a wave of adrenaline. The combination of Beethovenian intensity of No. 1 to the rustic folk rhythms and thrusting propulsion of No. 2, all the way to the eerie sadness and desolation of No. 6  a fine achievement  the performance of the 6th and last quartet is quietly devastating.
Record Review (BBC Radio 3) 11 June2017