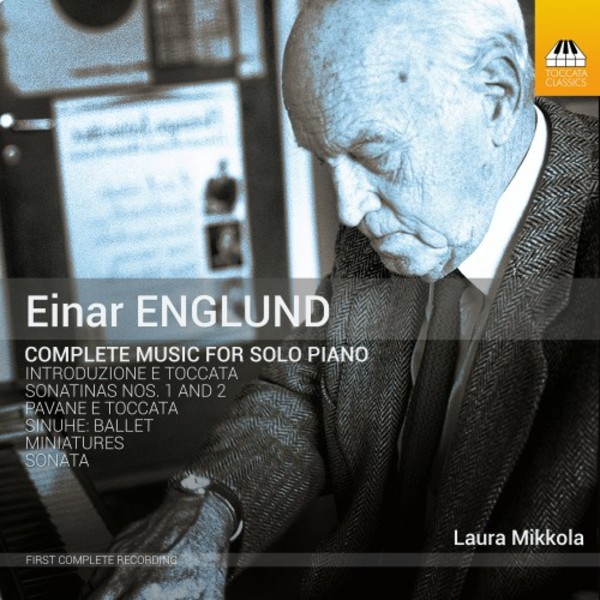 Einar Englund (1916-1999) was not only one of Finlands major symphonists; he was also one of his countrys most important pianists. He was destined for a virtuoso career until he damaged a finger as a soldier in the Battle of Bengtskjär in the Finnish Continuation War in 1941  but when he later discovered the bullet holes in his beret, he realised he had had a lucky escape!
Englund wrote surprisingly little for his own instrument, but the works he did produce glitter with a Prokofievan steely strength and textural clarity. They are also animated with the ironic humour that was typical of the composer himself.
The pianist here is one of Finlands finest musicians, Laura Mikkola. The booklet essay is by Christian Holmqvist, Englunds biographer, and is followed by a personal reminiscence of Einar Englund by Martin Anderson, founder of Toccata Classics.
Laura Mikkola studied at the Sibelius Academy in Helsinki, the Curtis Institute of Music in Philadelphia and the School of Music in Bloomington, Indiana. She has been the recipient of many awards, among them second prize in the Queen Elisabeth International Piano Competition in Brussels and the public prize (1995), first prize in the Maj Lind Competition in Helsinki (1992) and first prize in the Maurice Ravel Piano Competition in France (1988). She was awarded the Finland Prize for Young Artist in 1995. Now a major international artist, she has a repertoire which includes no fewer than 64 concertos. For Toccata Classics she recorded an album of David Matthews piano music. Her recordings of the three Rautavaara piano concertos for Naxos attracted especial attention.