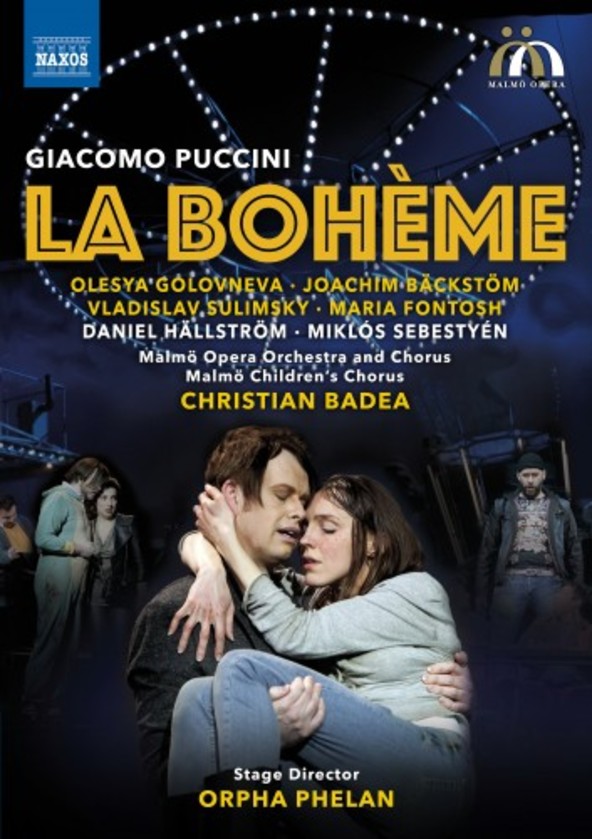 Based on stories by Henri Merger but also infused with the composers own experiences as a penniless graduate, Puccinis powerful opera La Bohème portrays its youthful characters romantic outlook on life and the brutally tragic end to their innocence. The story is set around 1830 but director Orpha Phelan sees Puccinis characters as equally at home in our times: their story is universal, all that is needed is to understand what it is like to be young and in love! This Malmö production was acclaimed in the Svenska Dagbladet as one of the most moving renditions of Puccinis opera I have ever seen.

This DVD and Blu-ray release captures the 2014 Malmö Opera production of La Bohème, acclaimed Irish director Orpha Phelans third with this company. The production brings Puccinis famous bohemians into the present day, emphasizing the universal nature of young lives and tragedies while also picking up on todays issues of urban poverty and gentrification.

Colourful and attractively dynamic in its use of distinctive Parisian carousels as stage sets, this production was received to great acclaim. Skanska Dagbladet remarked on outstanding performances in both singing and acting. The audience responded with ovations to tear down the theatre. Malmö Operas La Bohème is a hit!

Conductor Christian Badea has received exceptional acclaim throughout his career, encompassing prestigious engagements in the foremost concert halls and opera houses of Europe, North America, and Asia. Among the opera houses where Christian Badea has guest conducted are the Royal Opera House at Covent Garden in London, the Metropolitan Opera in New York, the Bayerische Staatsoper in Munich, Vienna State Opera, the Netherlands Opera in Amsterdam and many more. Maestro Badeas repertoire encompasses more than 100 operas with particular emphasis on the works of Mozart, Strauss, Wagner, Verdi, Puccini, Mussorgsky, as well as those of 20th century composers such as Prokofiev, Shostakovich, Janáček, Britten, Berg and Samuel Barber. He has conducted extensively the Italian and French repertoire, collaborating with the most important singers of the last two decades.