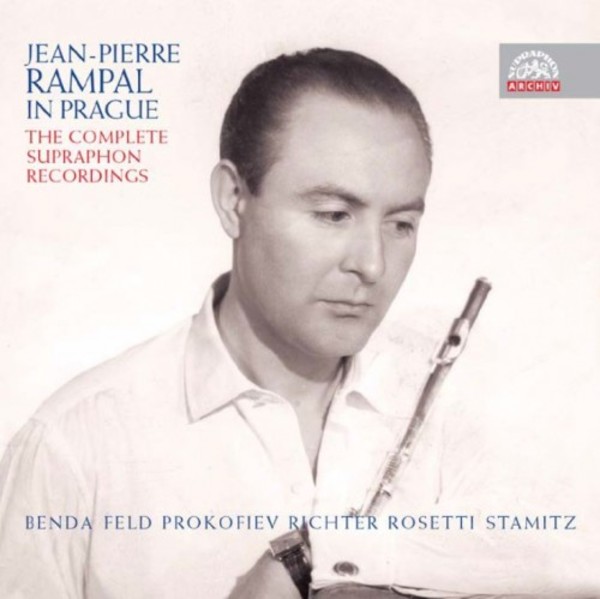 Flute Concerto in D major
Sonate da Camera no.3 in A major

Flute Concerto in D major
Sonate da Camera no.3 in A major

During his very first trip across the Iron Curtain, the French flautist Jean-Pierre Rampal (19222000), made friends with Milan Munclinger, an outstanding Czech musician, with whom he shared a passion for Baroque music. Owing to Munclingers initiative, on 31 May 1955 Rampal performed alongside the pianist Alfred Holeček before the packed auditorium within the Prague Spring festival. The very next day, Rampal made the first in his series of recordings for Supraphon, which featured Prokofievs Sonata. Until 1956, he made premiere recordings of sonatas by Frantiek Benda and F.X. Richter, concertos by Carl Stamitz and F.A. Rosetti, as well as, and most significantly  with the Prague Chamber Orchestra conducted by Munclinger  concertos by Richter and Benda. The latter two were extraordinary indeed, as evidenced by the international critical acclaim: the album went on to receive the prestigious Grand Prix du Disque de lAcadémie Charles Cros.

Rampals final Supraphon album, made with the Czech Philharmonic in April 1958, contains the Flute Concerto by the then 33-year-old Jindřich Feld, who primarily gained global recognition thanks to Rampal. The phenomenal French flautist would continue to come to Prague in the following years to give concerts and to meet his close friends among Czech musicians.