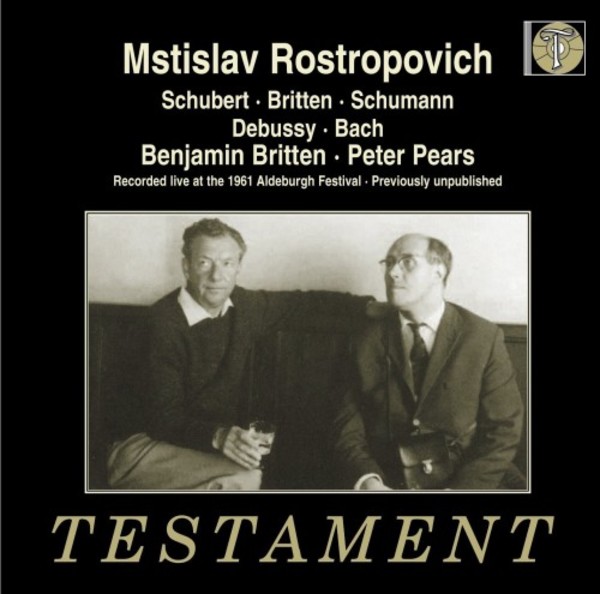 Rostropovich live at the 1961 Aldeburgh Festival

This recital at the Jubilee Hall on 7 July 1961 began with Schuberts Arpeggione Sonata, which Rostropovich had learnt at Brittens behest. Anyone who knows the studio version which the duo made for Decca in 1968 will find this performance a revelation.

In the case of Brittens Cello Sonata, the famous Decca recording was made a mere two weeks later and resulted in a definitive performance. Nevertheless, hearing how these two great musicians approached the work in its first performance is of much more than academic interest. The Dialogo starts and ends in elfin mood and is full of fantasy. The sense of fantasy also inhabits the Scherzo-Pizzicato, where Britten adds superb filigree playing to Rostropovichs pizzicati: the magical effect brings us close to the fairies of A Midsummer Nights Dream, premièred at Aldeburgh the previous year [and now available on Testament SBT21515]. The Elegia is the heart of the Sonata, distilling some half-remembered sadness with lovely tone from Rostropovich and great intensity from both players. The Marcia is like a manic dance-scherzo, with both artists calling on their reserves of colour and the concluding Moto perpetuo  which incorporates Shostakovichs DSCH motif  is like a fantastic chase.

The next two works were also successfully recorded for Decca, at the same sessions as the Britten Sonata. In the concert Schumanns Five Pieces in Folk Style are played with great character and the duo get right inside Debussys Sonata: in both works Britten rises to the challenge of matching Rostropovichs intense virtuosity, so that the outcome is exhilarating. At the end of the recital they encore the Marcia of the Britten, making it even more bizarre than before and then there is the sort of surprise ending that Rostropovich loved. On the previous night Britten took over from him at the piano, as the two of them accompanied Vishnevskaya in Villa-Loboss Bachianas Brasileiras No.5, and this evening Peter Pears joins the two instrumentalists for a beautiful performance of the tenor aria with cello obbligato, Woferne du den edlen Frieden, from Bachs Cantata BWV 41. His appearance emphasises the family nature of the Aldeburgh Festival in those days, and indicates that the Rostropoviches have already been admitted to the magic circle.

As a substantial further bonus, we have one of the two Bach Suites that Rostropovich played in the Parish Church three days earlier  the other seems not to have survived. The cellist did not make a studio recording of the complete Suites until very late in his career, when aspects of his interpretations, especially the Minuets, Bourrées and Gavottes, had become rather heavy.
 Extracted from the booklet note by Tully Potter