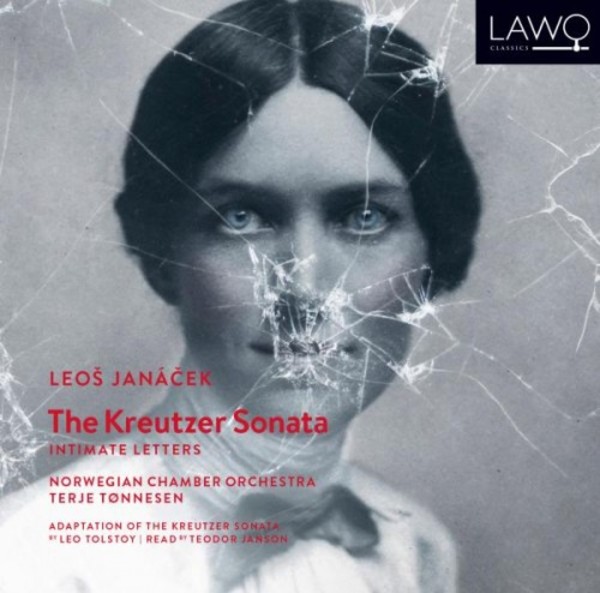 Tønnesen says of this recording: The idea of arranging Janáčeks two string quartets for string orchestra has implicated two different approaches for me. The first is timbral; while the quartets ever-changing dramatics make it challenging to resonate with the solo instruments in a string quartet, the collective sound of the orchestra adds a new dimension to the music.

The other approach was to incorporate Leo Tolstoy´s novella The Kreutzer Sonata into Janáčeks music of the same name, and thereby introduce a new form of drama.

In his quartet, Janáček does not follow the storyline of Tolstoys novella as closely as Arnold Schoenberg once did with his musical setting of Richard Dehmels poem, Verklärte Nacht. However Janáčeks writing brings on intense emotions with strong linguistic and theatrical gestures, which, in my opinion, would be further reinforced in direct connection with the novella.

Tentatively, we introduced a selection of quotes from the novella in our concerts and this eventually led to the idea of developing a radio drama performance. In this arrangement, the quartets four movements are performed in their entirety, strategically positioned in four crucial points in the story, while parts of the music also serve as a dramatic foundation for the text.

In the process of text adaptation, the novella´s plot and emotional aspects were given priority over its philosophical considerations.

Since its formation in 1977 the Norwegian Chamber Orchestra has established itself as one of the foremost chamber orchestras on the international classical music scene today. Current artistic director Terje Tønnesen has held this role since the orchestras formation.

Nervous systems go haywire when confronted with committed performances of Janáčeks two quartets. Imagine the impact, then, when both are carefully and selectively arranged for string orhestra, as they have been here by the Norwegian Chamber Orchestras inspirational artistic director Terje Tønnesen... The arrangements themselves embrace judicious solos with ensembles that are hair-raising in the stabbing sul ponticellos (close-to-the-bridge sequences) and barely audible in astonishing pianissimos. If you already have the quartet versions and love this music, add this beautifully-presented release to your collection.  David Nice (Orchestral Choice)
BBC Music Magazine June 2017