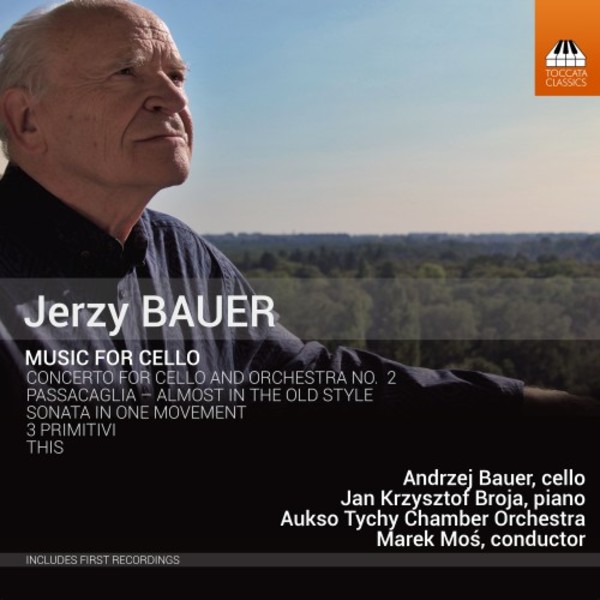 Cello Concerto no.2
Passacaglia: Almost in the Old Style
Primitivi (3)
Sonata in one movement
This

Cello Concerto no.2
Passacaglia: Almost in the Old Style
Primitivi (3)
Sonata in one movement
This

Jerzy Bauer (born in Łódź in 1936) is one of the leading Polish composers of his generation after Lutosławski and Panufnik. Since his son Andrzej is one of the major cellists of the current generation, it is hardly surprising to find that music for cello figures prominently in his large output. Bauers mild modernism shows a respectful engagement with the music of the past. The second of his two cello concertos demonstrates that he is fully aware that the cello is an instrument that sings, and his work This is inspired by a late poem of Czesław Miłosz. The booklet essay on Bauers music is written by Rafał Augustyn, himself a major Polish composer.

Cellist Andrzej Bauer is one of the leading Polish musicians of his generation. He has given recitals in Amsterdam, Hamburg, Munich and Paris, and performed with orchestras across Europe, the United States and Japan. He has recorded for radio and television stations in Poland and abroad and has many commercial recordings to his credit. His extensive repertoire features much contemporary music, including works composed especially for him. He is professor at the Fryderyk Chopin University of Music in Warsaw and the Feliks Nowowiejski Academy of Music in Bydgoszcz, where he is in charge of the cello classes. He has been devoting more and more time to composing and improvising music.

Jan Krzysztof Broja, born in Warsaw in 1972, has given concerts in Poland, Ukraine, Lithuania, Russia, in South America, the USA and Japan, and performed in many music festivals. He took part as an adviser in the production of Roman Polański's film The Pianist. He is a professor in the Conservatorio Superior de Música in Salamanca.