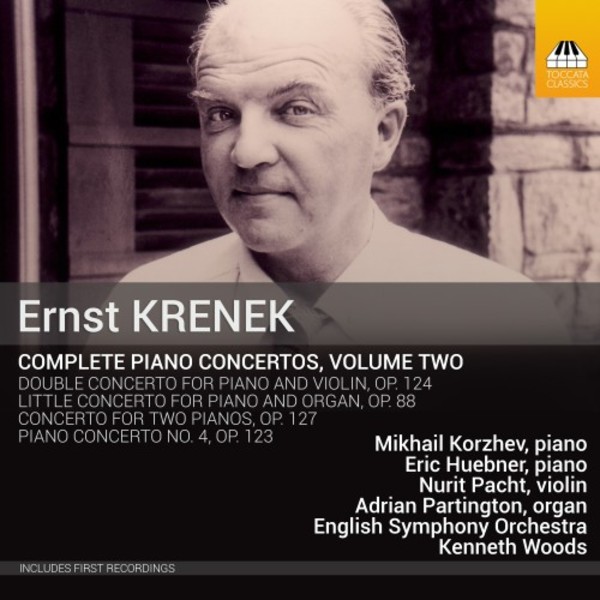 Ernst Kreneks seven piano concertos  four for solo piano, one for two pianos, one with violin and one with organ  is one of the major concerto-series of the twentieth century, but also one of the least familiar. This second instalment in their first complete recording reveals breath-taking bravura writing. Krenek revels in a virtuoso piano technique, the dazzling orchestration and the stylistic integration of serialism and good-natured recollection of Viennese tradition.

The first volume in this series was an outstanding critical success  among many other encomia, it was a Sunday Times Record of the Week, and in his blog Classical Ear Andrew Achenbach gave it two five-star ratings and wrote: Performances are first-rate: Mikhail Korzhev proves a superbly stylish, fearless and eloquent exponent, and he enjoys admirable support from a hugely spirited English Symphony Orchestra under Kenneth Woodss unfailingly cogent lead. Both the production and presentation likewise leave nothing to be desired.

Eric Huebner is pianist of the New York Philharmonic. He has premiered countless new works and appears with numerous NYC-based contemporary-music ensembles. He is an Associate Professor of Music at the University at Buffalo (SUNY) and since autumn 2014 has been a member of the adjunct faculty of The Juilliard School.

The violinist Nurit Pacht has featured in major world events, such as the European conference for the inauguration of the Euro in Brussels, and under the auspices of the European Commission and United Nations she toured the former Yugoslavia, during the cease-fire in 1996. In 2015, she performed for Pope Francis on his visit to New York and gave a State Department-funded recital tour of Ukraine.

Conductor, cellist, composer and author Kenneth Woods has been Artistic Director and Principal Conductor of the English Symphony Orchestra since 2013. He is a widely read writer and frequent broadcaster, and his blog, A View from the Podium, is one of the 25 most popular classical blogs in the world. He has spoken on BBC Radio 4s Today Programme and is a frequent commentator on BBC Radio 3.