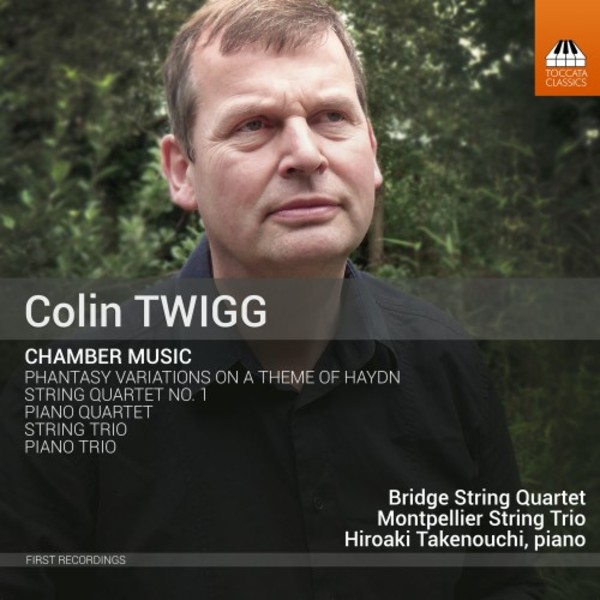 The English violinist and composer Colin Twigg (born in North Yorkshire in 1960) first came to attention as a finalist in the BBC Young Musician of the Year competition in 1978 and has since made his living as a chamberand orchestral musician. Composition has always been important to him, and his music reflects the richness of his performing career. Its roots are in the great composers of the past, synthesised into an articulate voice that is accessible in style and satisfying in its craftsmanship. The composer himself performs in all the pieces recorded here, guaranteeing their authenticity, and has written the booklet notes himself, too. All five pieces are receiving their first recordings here.

The Bridge Quartet, founded in 1989, soon established a reputation as leading interpreters of English music. They have since travelled widely to festivals in USA, France, Spain, Italy, Croatia, Bulgaria and Kenya, broadcasting English music live on the BBC and on various continental radio stations. As Kirckmann Concert Society artists the Bridge Quartet has given three recitals in Londons South Bank concert halls and have subsequently given several concerts in the Wigmore Hall. Other highlights have included appearances at the City of London Festival, the English Music Festival, the Haydnfest in Manchester, and Warwick International Chamber Music Series.

The Montpellier String Trio came into being in 1995 and comprised three players from the City of Birmingham Symphony Orchestra: David Powell (cello) and Colin Twigg (violin/viola) were founder members, and Marcus Barcham-Stevens (violin) joined in 2000. Their many performances included collaborations with oboists Jonathan Kelly and Rainer Gibbons, and their broad repertoire included string trios by Robert Simpson, Elizabeth Maconchy, and John Joubert. The group disbanded in 2011.

Hiroaki Takenouchis natural curiosity has given him a vast repertoire unusual amongst his generation of pianists. Recent releases have included two-piano arrangements of Deliuss orchestral works, and an album of piano concertos by Catoire and Sherwood (also first recordings).