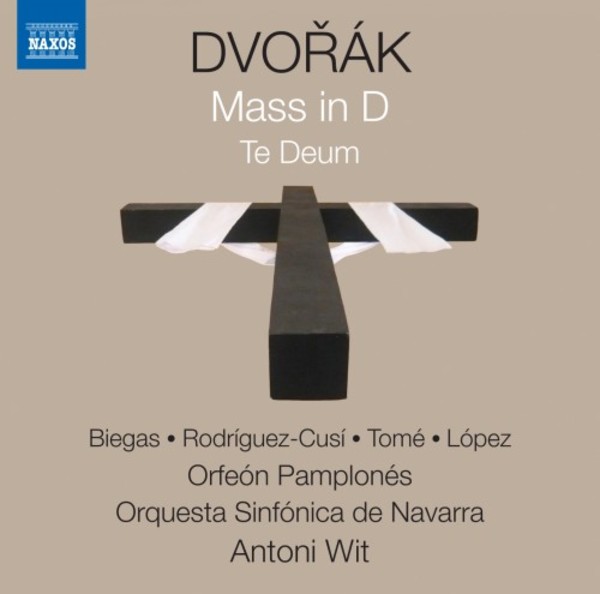 A native of Bohemia, Antonín Dvořák contributed much to the re-establishment of Czech national musical identity in the 19th century. It was the popularity of his choral music in England, however, that led to the development of the Mass in D from its smaller-scale original into a movingly dramatic and jubilant masterpiece with full orchestra. Dvořáks celebratory Te Deum is comparable in form to a four-movement symphony. Antoni Wit is considered by ClassicsToday.com to be the best conductor around these days for big choral works. His acclaimed recording of Dvořáks Requiem is available on Naxos 857287475.

Antoni Wit has made over 200 records, including an acclaimed release for Naxos of the piano concertos of Prokofiev, awarded the Diapason dOr and Grand Prix du Disque de la Nouvelle Academie du Disque. In January 2002 his recording of the Turangalîla Symphony by Olivier Messiaen (855447879) was awarded the Cannes Classical Award at MIDEM Classic 2002. He has completed for Naxos a CD series of Szymanowskis symphonic and large-scale vocal-instrumental works, each rated among discs of the month by CD magazines (Gramophone, BBC Music Magazine). He also received the Record Academy Award 2005 of Japanese music magazine Record Geijutsu for Pendereckis Polish Requiem (Naxos), and four Fryderyk Awards of the Polish Phonographic Academy. In 2012 he received a Grammy Award for Pendereckis Fonogrammi, Horn Concerto and Partita (8572482). In 2010 Antoni Wit won the annual award of the Karol Szymanowski Foundation for his promotion of the music of Szymanowski in his Naxos recordings.

Dvořáks Mass in D major has relatively few recordings in the catalogue, appearing more often in its version with organ accompaniment. Of the orchestral version there is a 1999 Chandos label release with the Russian State Symphony Orchestra and Symphonic Capella, and in 1998 with Prague Symphony conducted by Václav Smetáček on Supraphon. The Te Deum is best known for its 1982 recording with Vaclav Neumann and the Czech Philharmonic Chorus and Orchestra.

The strong line-up of soloists for this recording include renowned operatic soprano Ewa Biegas whose career was launched as winner of the 1996 Polish National Vocal Competition in Wrocław, and baritone José Antonio López who is much in demand as a leading character, having taken roles such as Figaro (Barber of Seville), Escamillo (Carmen), Mozarts Don Giovanni, Papageno, Figaro and Guglielmo and many others.

The well-established Orfeón Pamplonés choir is one of the oldest and liveliest musical institutions of its kind in Europe, its more recent awards including the 2012 Press Association Award and The Gold Medal of Navarre.

This release is a natural partner to Antoni Wits 2014 Naxos recording of Dvořáks Requiem, considered a performance that sounds just right by Gramophone, and with playing of the highest order refined and ethereal beautifully sung (MusicWeb International).