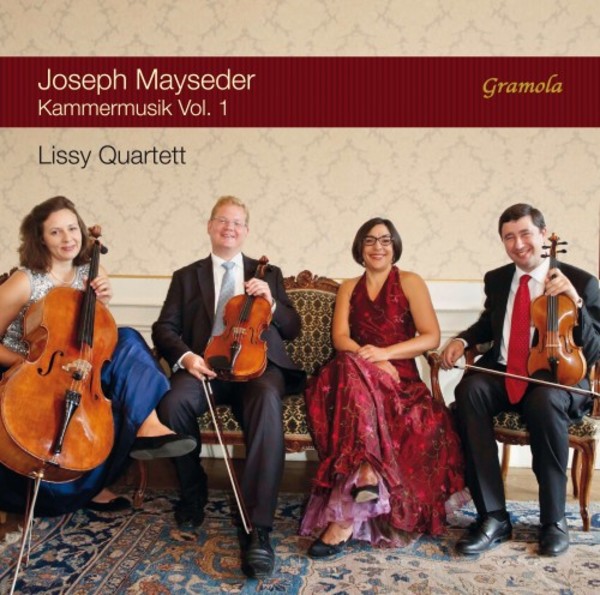 The Austrian violinist, teacher and composer Joseph Mayseder (1789-1863) can be counted amongst one of the most well-known virtuosos of 19th-century Viennese musical life. He performed under the baton of Haydn, Beethoven and Schubert and was a hugely significant composer, with over 900 of his works being printed in European countries and abroad. Formed around violinist Raimund Lissy, a member of the Vienna Philharmonic Orchestra, the Lissy Quartett are passionate about bringing the chamber music works of Mayseder to a broader audience. This first edition contains world premiere recordings of Mayseders Concert Variations Op.63 Souvenir à Baden, Op.57 and Op.24, as well as the Divertimento for violin and piano Op.35.
The members of the Lissy Quartett (founded in 2008) have made it their goal to bring more attention to infrequently performed repertoire for piano quartet in the concert hall. Through these performances the four artists - Raimund Lissy, violin, Robert Bauerstatter, viola, Maria Grün, cello and Srebra Gelleva, piano not only convey their joy in making music together, but demonstrate their ability to provide music of the highest artistic quality. The ensemble gave its debut performance at the Austrian Music Weeks Festival in Sofia, Bulgaria in 2008. They subsequently performed at the March Music Days International Festival in Ruse, Bulgaria, as well as additional concerts in Bulgaria, Mexico City and in Krems an der Donau, Austria. Since 2011, the Lissy Quartett has played an annual concert in the Glass Hall of the Wiener Musikverein. Their repertoire comprises not only works by famous composers such as Mozart, Brahms and Mendelssohn, but also contains rarities by Joseph Mayseder, Louise Héritte-Viardot, Mel Bonis, Germaine Tailleferre, Richard Franck and Joseph Marx amongst others.