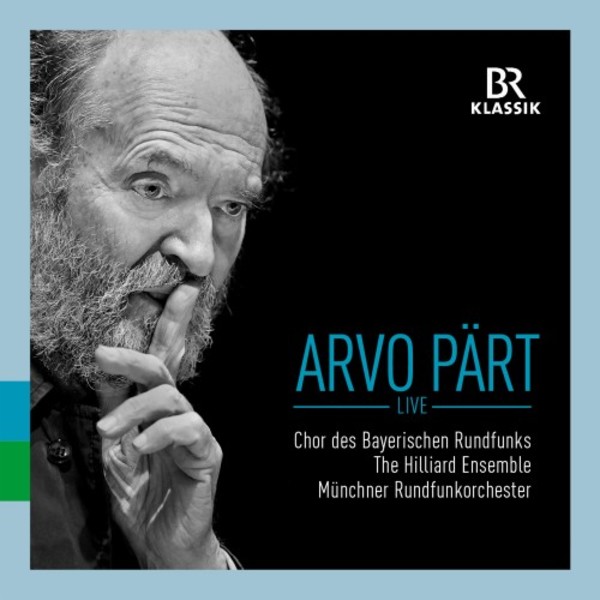 Arvo Pärt, who was born in Estonia in 1935, has succeeded in bringing sacred music back to a broader audience, and away from the confines of the church service, more than almost any other contemporary composer. The meditative character of his works, and his return to the simplest and most basic musical forms, convey moments of intense spirituality. Even before his emigration from the Soviet Union to Austria and then to Germany, Pärt had already invented what he termed the tintinnabuli style of composition (from the Latin word for a bell). He produced an early and important example of this style in 1977 with the Cantus in Memory of Benjamin Britten, scored for string orchestra and bell, and it is also a key feature of the three great choral works that form the greater part of this new BR-Klassik CD Arvo Pärt: Live, namely the Seven Magnificat Antiphons for mixed choir a capella, the large-scale oratorio Cecilia, vergine romana for mixed choir and orchestra, and the vocal work Litany: Prayers of St John Chrysostom for Each Hour of the Day and Night for soloists, mixed choir and orchestra. Also included on this CD is the Collage on B-A-C-H for strings, oboe, harpsichord and piano. Composed in 1964, before Pärt's aesthetic reorientation, it is one of his most famous works.

Despite its radical reduction of means of expression, Pärt's music demands the greatest care in execution from those performing it  and this has been masterfully realized in the present recording by the Chor des Bayerischen Rundfunks and the Münchner Rundfunkorchester, whose combined and homogenous sound is a direct result of their regular cooperation. Ulf Schirmer, Marcello Viotti und the choir's current artistic director Peter Dijkstra here demonstrate their deep familiarity with the subtle sound-world of Arvo Pärt. These live recordings were made at Munich concerts in July 2000, February and December 2005, and January and October 2011, all of which received public and critical acclaim.