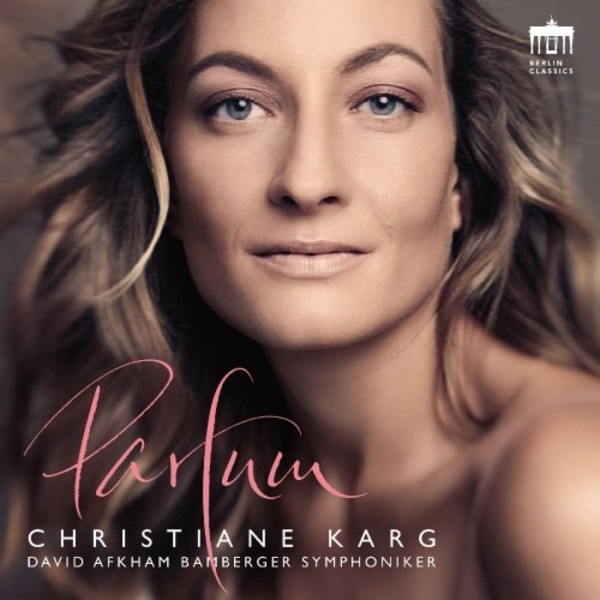 This album is pure poetry  taking its spark from Christiane Kargs engagement with the poetical works of Charles Baudelaire, Leconte de Lisle, Paul Verlaine, Tristan Klingsor and Victor Hugo. A poetry in diction that has a wonderful affinity with Impressionist music at the turn from the 19th to the 20th century. Christiane Karg finally decided upon works by Duparc, Koechlin, Debussy and Ravel for her new album. Her selection also includes an early composition by Benjamin Britten, which in its turn was inspired by Debussy and Ravel. Christiane Kargs voice wafts this poetic scent, these colours in sound, aloft. Poetry and music, words and voice blend into Parfum!

Karg is an outstanding lieder singer [...] the entire programme is well thought-out and a source of delight.  Record of the week
The Times 30 April 2017

Asie!, Christiane Karg sighs at the beginning of Ravels song cycle Shéhérazade, and you can sense her excitement as she describes an imaginary Asia and its assault on the senses Shes at one with David Afkhams smoothly responsive orchestra, but manages to impart the feeling that shes singing everything in her own sweet time  this musics style to a T.  Erica Jeal
The Guardian 4 May 2017

Performances from Karg that manage to combine aching sensuality with crystalline purityDeliciously fragrant as the album title Parfum suggests; it delivers...  Disc of the Week
Record Review (BBC Radio 3) 3 June 2017

So much beautiful music on one disc should not be allowed.
Financial Times

Karg is an outstanding lieder singer, but here she takes on roles in French, whose words by Tristan Klingsor (the alias of Leon Leclere), Verlaine and Hugo (Britten), as well as Leconte de Lisle (Koechlin and Duparc), she sings most eloquently, soaring above the Wagnerian orchestrations the entire programme is well thought-out and a source of delight.  Hugh Canning (Album of the Week)
The Sunday Times 1 May 2017