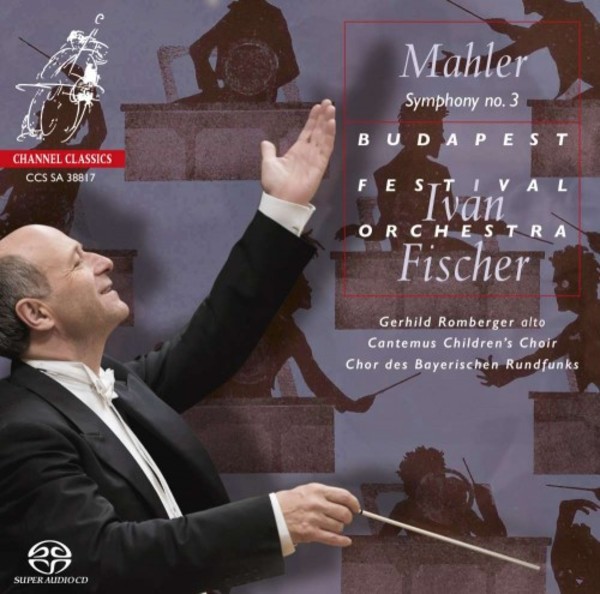 Gustav Mahlers Third Symphony, lasting one-and-a-half hours or more, is not only his longest work but at the same time an exuberant and sunny ode to nature, mankind, the world and indeed life itself. And for this song of praise the composer requires both room and lavish means.

No fewer than six movements, the richest of orchestral forces, and a contralto soloist and boys and womens choirs whose sung texts help to bring across the Symphonys message, as in the Second Symphony and later in the Fourth and Eighth as well.

Gerhild Rombergers extremely extensive repertoire encompasses all the major contralto and mezzo-soprano parts in the oratorio and concert literature from the Baroque to the Classical and Romantic periods all the way to the twentieth century.

There is something divine in the wealth of this great masterpiece. - Iván Fischer

the great partnership of Iván Fischer and his Budapest players make music of supreme intimacy and vitality. They endow the work with a poise and lyricism too often sacrificed in favour of frenzied intensity... - The Observer, 17 November 2013 ****

Fischer is faithful to Mahlers score, yet lays bare this musics poignant sense of a leave-taking, even if it was not to be the composers last word on the symphony. - Sunday Times, 14 June 2015

Fischer gives us the edginess of Bernstein without his tendency to wallow. ...it's the small things that so often strike sparks - Gramophone Magazine, June 2015

Ever since the 2005 release of their account of Mahlers Sixth Symphony, Iván Fischer and his Budapest Festival Orchestra have established themselves at the forefront of present-day Mahlerians. Their interpretations have been hailed for a combination of textural clarity and detail with expressive commitment, and their latest release, of the Third Symphony, is perhaps the best yet. This is one of Mahlers most ambitious works and, at over 90 minutes, certainly the longest. According to the composers own programme, which he later suppressed but (tellingly) never destroyed, it traces an upward journey from primordial, Dionysian raw nature, via the flowers of the meadow and the beasts of the forests, through Night (man) and Day (angels) to a transcendent vision of divine Love.

Fischer clearly grasps this underlying programme, and his approach to it is a distinctive one. The opening unison horn melody was for Mahler an Awakening Call, and most conductors, to a greater or lesser extent, take the opportunity to grab the music by the scruff of the neck. Fischer starts purposefully, but he allows the music to unfold naturally yet without any loss of momentum. Its typical of his way with the entire work: the strings of other orchestras tend to dig in to Mahlers writing, but the Budapest strings instead radiate an almost unalloyed joy. This is a Dionysian world viewed through an Apollonian prism. Not that the irony or sense of grotesque is missing: yet passages like the wild Mob scene towards the end of the development are as clear and finely delineated as youll ever hear them, while still making for gripping listening.

As in the similarly structured Second Symphony, two vast outer movements bookend a series of shorter inner ones: and it is the latter that are the works beating heart, so tricky to bring off in performance, but unerringly paced and balanced by Fischer and his players. The Menuet dances gracefully, while the folk-like third movement, with its Wunderhorn references and distant posthorn solo (given a perfect aural perspective) is utterly magical. The fourth movement, a sombre yet rapt setting of a text from Nietzches Also sprach Zarathustra, is lent extra depth by alto Gerhild Romberger: there is no finer Mahler singer today, combining beauty of tone with acute textual awareness in a way that perfectly matches Fischers (and Mahlers) overall conception. The variety of colours and nuances produced by the orchestra at hushed dynamic levels has to be heard to be believed.

For the angelic fifth movement, Romberger and the orchestra are joined by the Cantemus Childrens Choir from Nyiregyháza and the women of the Chor des Bayerischen Rundfunks for one of the most uplifting performances of this music ever committed to disc; even the troubled central section has a buoyant lightness to it, and the musics expressive impact is far greater than its four minutes duration might suggest.

In the achingly beautiful sixth movement  a vast symphonic Adagio in all but name  Fischer again scores over all his rivals with a distinctive reading in which the strings use sparing vibrato and the subtlest nuances of shading to hold the listener spellbound. No need for Maazels ugly tempo distortions here, nor Gergievs indecent haste at the close to bring the movement to a climax. Even the supremacy of Abbados near-definitive Lucerne account (on DVD) is challenged here by the Budapest orchestras wonderfully open, airy tone, allowing subtle details to emerge without the least hint of artifice, while Fischers handling of the overall arc is masterly. In the final bars, he rightly keeps the timpani in check as few others do (they and the brass are marked only forte, against the rest of the orchestras fortissimo). The result is that the Symphony closes not in a blaze of barnstorming glory, but with a warm, incandescent glow, crowning a performance of exceptional sensitivity, beauty, space and perceptiveness.

Its all superbly caught by Channel Classics engineers, with Surround Sound for those that have the appropriate equipment. If Fischers remaining recordings in this series (the endlessly elusive Seventh and monumentally mystical Eighth) are up to this standard, we will have a Mahler cycle for not just this but every age, both visionary and emotionally compelling. In sum: a life-enhancing triumph, unmissable for all who love this music.

If youve enjoyed it as much as I have then youll need no encouraging to head for the second disc...  Andrew McGregor
Record Review (BBC Radio 3) 20 May 2017

Fischers oompahing brass are terrific in the scherzos rowdier passages, and we get an ideally balanced post horn solo. ... And what a finale: Fischers flowing speeds avoiding any hint of bombast, the final cadence unforced and radiant. Everyone needs multiple recordings of this symphony. Add this new one to the pile.
theartsdesk.com 10 June 2017

Like a sound of nature. Thats the description that Mahler wrote above an oboes cry in his epic Third Symphony from the 1890s. And its a tag that Ivan Fischer has clearly taken to heart in this most eloquent and immersive performance  the latest in his Mahler cycle with the superb Budapest Festival Orchestra. Cuckoos, nightingales and birds galore; furry forest creatures; the anxiety call of the contrabassoon: theyre spotted all over the bulk of this massive hymn to life in all forms. Ive never heard a performance that captures natures canvas so well in a symphony that almost deserves to be known by a nickname  say, The David Attenborough.  Geoff Brown
The Times 16 June 2017

Dont be put off by the less than cosmic horns at the start of this Third, it goes on to be as vivid a performance as one would expect from this source. ... Always alive, though, always interesting , vivid in sound.  David Nice
BBC Music Magazine July 2017

Every player seems to have thought about his part afresh and emotional power grows out of countless small moments, not the usual grandstanding. Some may find the performance too calculated. Others will admire its restraint, its eloquence, its distinctive voice.
Financial Times 16 June 2017

I doubt whether there has ever been a more precisely focused, more sheerly beautiful recording of any Mahler work. ... Those who feel that Mahler miscalculated the insistent grandeur of his endings will appreciate the way Fischer, like Abbado, makes the texture less brazen at the close, muffling the timpani into the bargain. Those who do not may also resist the manner in which Fischer defangs the sweatier, more demotic episodes of the first movement despite a sometimes breathtaking variety of affect.

The rural idyll is most potent and incontrovertibly right in the inner movements, all maximally transparent. Difficult to imagine the avowedly summery third and its distanced solos being bettered any time soon. ... Youd have to be hypercritical indeed not to rejoice in the appearance of a studio recording made the old-fashioned way with exquisite care, multiple takes and not a trace of routine in the playing. ... This Third is a must-have.  David Gutman
Gramophone June 2017

Fischer... is a challenge, inviting listeners to rethink and recalibrate their responses to the piece. Not everyone will be prepared to make the leap, but those who do will be handsomely rewarded.

Without question, the finest instalment in Fischers Mahler cycle to date; and what breathtaking sound.  Dan Morgan (Recording of the Month)
MusicWeb International May 2017