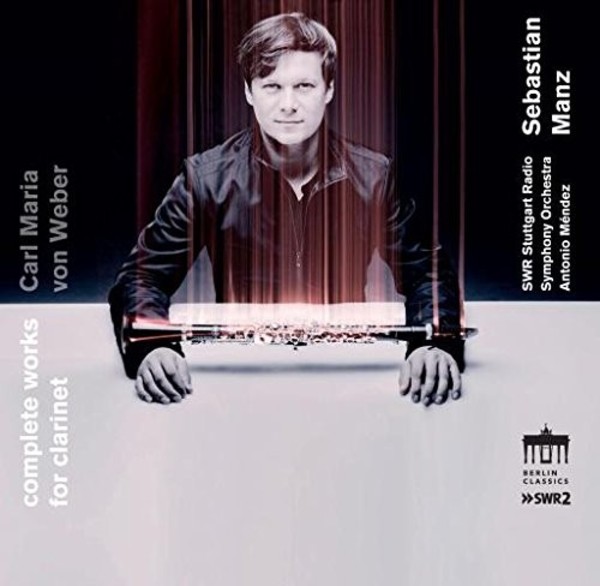 That is quite a coup! Sebastian Manz, ARD Music Competition winner and solo clarinettist of the SWR Symphony Orchestra, sums up the years he has devoted to the clarinet works of Carl Maria von Weber by presenting a complete recording of those works on a double album. Weber's two concertos for clarinet and orchestra, a Concertino, a Grand Duo Concertant, the Silvana Variations and a clarinet quintet represent some of the most important works for clarinet ever written, true masterpieces of the Romantic era.

Weber's music also marks a milestone in the musical life of Sebastian Manz. In his youth, he heard a recording of the Second Clarinet Concerto ‐ with jazzman Benny Goodman as soloist ‐ and it was Goodman's energetic playing that convinced the young Sebastian Manz that nothing less than intensive engagement with his instrument would do. Like Goodman, who took a jazz musician's liberties with Weber's work, Sebastian Manz himself enhances the compositions with all the artistic devices at his disposal.

In preparing for this recording, he made a close study of the score that belonged to Heinrich Joseph Baermann, the great clarinet virtuoso of his day, who kept up a close friendship with Carl Maria von Weber and was involved in the composition of the clarinet works from start to finish. The consequence was that Baermann prepared his own versions of the works, taken as standard by many clarinettists to this day. Not that Manz ever regarded that as an option! He has developed his own interpretations ‐ resulting in an individual reading full of lightness and artistic invention.

The comprehensive uniqueness on all levels of Sebastian Manz's recording has much to do with the circumstances under which it was produced. As solo clarinettist of SWR's Radio Symphony Orchestra Stuttgart (since September 2016, the SWR Symphony Orchestra) Sebastian Manz was able to bring his own Stuttgart colleagues on board for the recordings ‐ making a team that delves into the technical subtleties of Weber's works while also plumbing their emotional depths. Other recording partners include longstanding (chamber music) friends such as pianist Martin Klett, with whom Sebastian Manz won the German Music Competition back in 2008, the Casal Quartet from Switzerland and double‐bass player Lars Olaf Schaper. The bassist backs Manz and the quartet in Weber's famous Clarinet Quintet. As arranged by Sebastian Manz himself.

Sebastian Manz, who began taking clarinet lessons when he was six, was making his own early discoveries of Weber in concert performances both as an early student and later on a degree course with Sabine Meyer and her husband Reiner Wehle in Lübeck, notably in the First Clarinet Concerto and somewhat later in the Concertino, which he performed at EXPO 2000 in particular with the Youth Symphony Orchestra of Hanover under Cornelius Meister. And in 2008, when Manz collected first prize in the clarinet category at the ARD Music Competition ‐ a prize that had not been awarded for 40 years ‐ along with three further prizes and the audience prize, Weber was key to his success. ECHO Klassik awards, a residency in the Junge Wilde series at the Konzerthaus in Dortmund ‐ Weber and his oeuvre always plays a decisive part. This complete recording of the clarinet works brings the wheel full circle, for now, for Sebastian Manz: Carl Maria von Weber ‐ sorted.