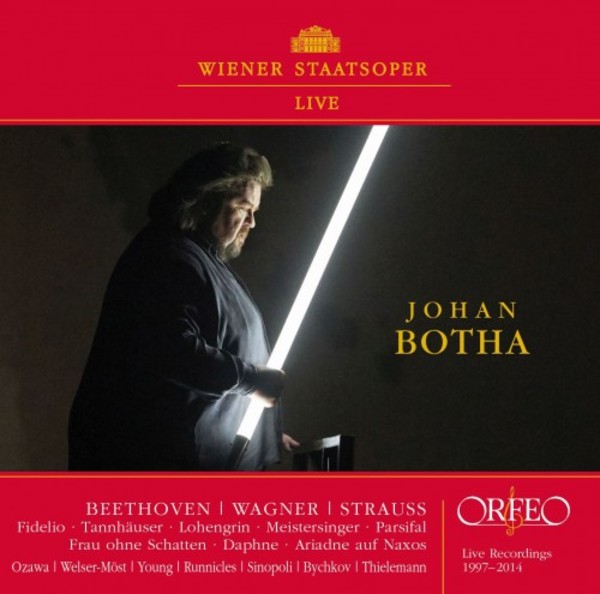 Johan Bothas unfailingly radiant voice  notably in the middle register  established him over many years as a Strauss and Wagner singer par excellence, but most of all as a youthful hero, and not as a weighty heroic tenor. In fact Tannhäuser was something of a marginal role for him, but what a role! The recording of the Rome episode in the Vienna State Opera premiere of 16 June 2010, with which (after the Florestan aria from Fidelio) the CDs four-part Wagner portrait begins with excerpts from Vienna Staatsoper productions, movingly reveals how as a suffering yet passionate pilgrim  at the side of Christian Gerhaher as Wolfram  he returns from Rome dejected and unredeemed.

The bridal-chamber scene from the third act of Lohengrin looks back to Bothas early years at the Staatsoper. Opposite Cheryl Studer as Elsa, he was just 31 years old in 1997. Fifteen years later, Botha is an ideal, alert Walther von Stolzing, who after a night of dreams reveals his Prize Song to cobbler-poet Hans Sachs, who in turn refines it and writes it down. The Franconian knight was known to be his favourite Wagner part ever since his sensational debut in the role at the Vienna Volksoper in 1998. And in 2004, Botha begins his scene with Kundry (Angela Denoke) from the second act of Parsifal as a guileless youth whose cries of Amfortas! after Kundrys kiss and the knowledge that it brings are possessed of a troubling primal force. Three of the loveliest and most important Strauss roles are also to be found on the CD. In addition to the Emperor (Die Frau ohne Schatten), whom Botha had already sung to great acclaim at the Salzburg Festival in 2011 and reprised in 2013 for the 50th anniversary of the reopening of the Nationaltheater in Munich, we hear his proudly dominant Apollo (Daphne). At the climactic moment of the opera, the conflict between the god and the two mortals ends with Apollos sudden extinction of his human rival. The most moving scene comes perhaps at the close of Ariadne auf Naxos, when a figure hailed as Hermes, the divine messenger of death, proves to be Bacchus, the god of love, and Ariadne (Soile Isokoski) timidly asks him: Is there no farther shore, are we there already? The recording of 18 October 2014 captures one of Johan Bothas last appearances at the Vienna Staatsoper. He died on 8 September 2016  aged just fifty-one.