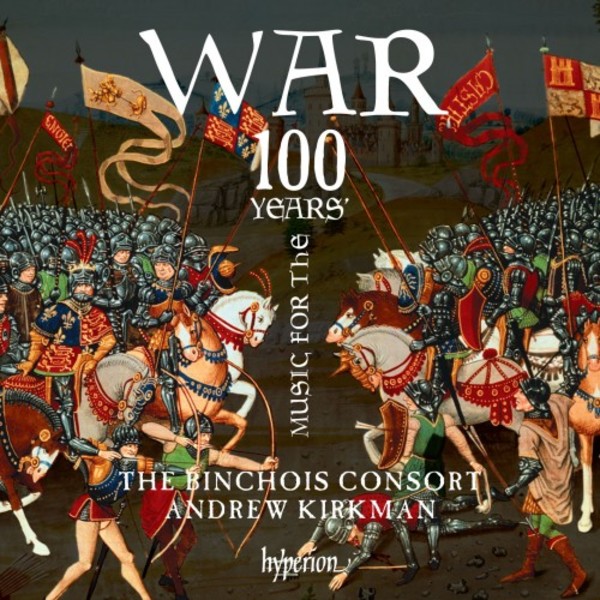 Music for the 100 Years War: A Brief History in Music & Alabaster

Music of predominantly royal association spanning the reign of Henry V, the Battle of Agincourt and its aftermath, and the coronations in England and France of the boy king Henry VI. The Binchois Consort under Andrew Kirkman bring this music vividly to life, while the copiously illustrated booklet is a pleasure in itself.

A festive, celebratory disc in many ways - Gramophone on CDA67868 (Music for Henry V & the House of Lancaster)

Although their early discography concentrated on the works of Guillaume Dufay, the Binchois Consort under their director Andrew Kirkman have in recent years shifted their focus to the late medieval English repertoire that was so influential on Continental composers. In 2011 they scored a notable success with their CD entitled Music for Henry V and the House of Lancaster. Their new disc, Music for the 100 Years War is if anything even finer. Part of an interdisciplinary project focusing on English music and alabaster sculptures from the long 15th century (c13801520), it aims to recreate not just the aural but the visual and spatial elements of a period that has long fascinated historians, playwrights and (in recent times) filmmakers. Anyone with an interest in Shakespeare's history plays and their representations across a variety of media (The Hollow Crown comes to mind) will find this reflection of culture, religion and politics in the Lancastrian era completely absorbing.

The handsome booklet includes not just detailed notes by Kirkman and musicologist Philip Weller, but gorgeous full-colour images of translucent English alabasters, many of them from the Castle Museum in Nottingham where the Binchois Consort undertook a residency at the time of the recording. Products of the English Midlands, that fed both domestic and export markets, they amplify and fill out the themes explored by the musical programme itself, helpfully organised into sections which focus on kingship and nationhood, national saints (Thomas and Edmund), and ceremonial rites of various kinds.

The music itself ranges from rousing early English carols (the splendid Anglia tibi turbidas and the famous Agincourt Carol) to exquisitely refined isorhythmic motets. It embraces two masterpieces of the first order from John Dunstaple, the motets Preco preheminencie and Veni Sancte Spiritus, as well as his Missa Da gaudiorum premia (its Kyrie completed by Weller) and two Mass movements by the slightly earlier but just as important Leonel Power, a Gloria and Credo on themes associated with Thomas Becket. If Dunstaples music is the main attraction here, it by no means overshadows the rest of the music  much of it anonymous  which is of the finest quality throughout. One such item is meltingly gentle Ascendit Christus super celos by the shadowy Forest (a gifted composer of the early 15th century about whom precious little is known).

All the music displays aspects of the Contenance Angloise that so fascinated Powers and Dunstaples Continental contemporaries: the winning thirds and sixths of the harmonies, the graceful melodic shaping, and the formal inventiveness and innovation. To modern ears, it sounds surprisingly sweet for the period, and to contemporary ears it must have sounded positively opulent, akin perhaps to tasting a particularly fine dessert wine. All these properties and more are brought vividly to life by Kirkman and his singers, the music unerringly paced, the dynamic shading perfectly judged. In those works that invite a more forthright tones, the Binchois Consorts upper voices take on a gleaming metallic hue that suggests (not inappropriately) polished steel.

All six singers (two male altos and four tenors) give their utmost throughout, accentuating the inbuilt exuberance of the music, which itself testifies to the self-confidence of a nation at the height of its powers. At a time when the nations of the United Kingdom are coming to terms with Brexit, this disc is a reminder of how the wheels of history, society and culture turned in an earlier era. A generation ago, the Gothic Voices disc of Hildegard of Bingen, A Feather on the Breath of God (also from the Hyperion label), was the disc of medieval music that graced collections otherwise devoid of such repertoire. Could it be that this very different collection of late medieval music will be another such genre-busting disc? It certainly deserves to be, for it is a tremendous and engrossingly imaginative achievement.

The rollicking Agincourt Carol sounds less pugnacious than from Gothic Voices all those years ago, more an outgoing expression of grateful thanksgiving; the two isorhythmic motets by Forest are as melodically felicitous as anything by Dunstaple, who himself is represented by works of the first importance...

The concentration of Dunstaples music is one of the discs high points, worth the price of admission on its own: the second section of the Kyrie in particular shows off the understated eloquence of both composer and ensemble.

Two other memorable aspects are worth mentioning; first the startling Latin pronunciation in the English medieval manner, which renders familiar texts virtually unrecognisable at times, and which The Binchois [Consort] carry off with no perceptible discomfort; second, the exquisite photographs of English alabaster carving that form a visual counterpart to the music recorded here. Each feature in its own way deepens ones apprehension of the culture that gave rise to it.  Fabrice Fitch
Gramophone April 2017

The mysterious and influential John Dunstaple (c1390-1453) is the best known of the composers here. His Missa Da gaudiorum premia and Veni Sancte Spiritus are highlights on a fascinating disc. Commemorating the battle of Agincourt (1415) and other events in the hundred years war, this unaccompanied vocal music explores themes of kingship, martyrdom and nationhood.  We are lucky to have the Binchois Consort  here, two altos, four tenors  to bring this haunting, often jubilant early English repertoire to full-blooded life. The booklet is illustrated with English carved alabasters from the Castle Museum, Nottingham, where this outstanding consort has had a residency.  Fiona Maddocks
The Observer 26 March 2017