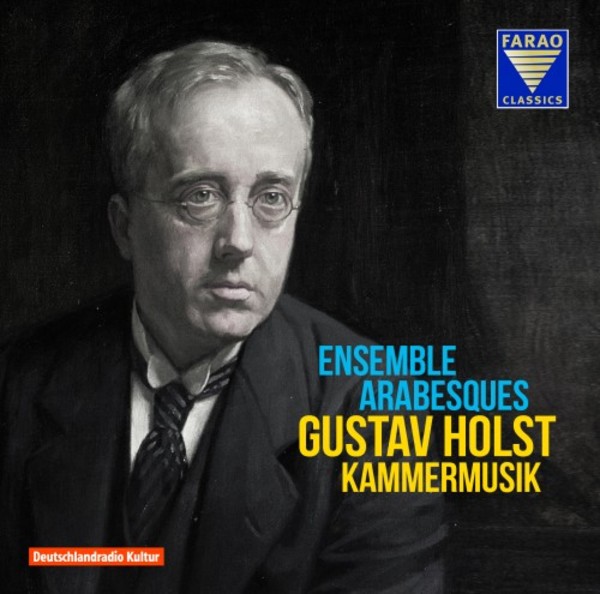 Pieces (3) for oboe and string quartet
Quintet in A minor, op.3
Sextet E minor for oboe, clarinet, bassoon and string trio
Terzetto for flute, oboe and clarinet
Wind Quintet in A flat, op.14

Pieces (3) for oboe and string quartet
Quintet in A minor, op.3
Sextet E minor for oboe, clarinet, bassoon and string trio
Terzetto for flute, oboe and clarinet
Wind Quintet in A flat, op.14

The English composer Gustav Holst is known to many music lovers for just one symphonic work: The Planets. This orchestral suite, first performed in its entirety in 1920, was certainly his greatest success during his lifetime, but it reflects only one small aspect of the composer and his intellectual world. Holst's chamber-music works, full of consummate grace and still written in the late-romantic vein, prove that his work deserves much greater attention.

The Sextet in E minor from 1900 for mixed strings and woodwinds, which is recorded here for the first time, fills a gap in the repertoire. It was not until the start of our century that Helge Bartholomäus unearthed this work, composed towards the end of Holst's student days, in the British Library archives and published it. The Sextet has something of the lightness of a serenade, and in many passages sounds like a double trio for woodwinds and strings. A true find!

In 2011, the German-French cultural festival Arabesques was launched in Hamburg. With more than 50 events each year, it is now the biggest festival of its type in northern Germany.

The Ensemble Arabesques, which to begin with was active only during the festival, has now developed its own momentum and performs in Germany and abroad throughout the year. The ensemble is made up of musicians from the three major Hamburg orchestras  the Philharmonic State Orchestra Hamburg, the NDR Elbphilharmonie Orchestra and the Hamburg Symphony Orchestra. In varying combinations, the artists focus mainly on unusual musical projects ranging from baroque to modern. Little-known composers or works that have fallen into oblivion form a central part of the ensemble's work. German radio station Deutschlandradio Kultur has supported and promoted this commitment from the outset.