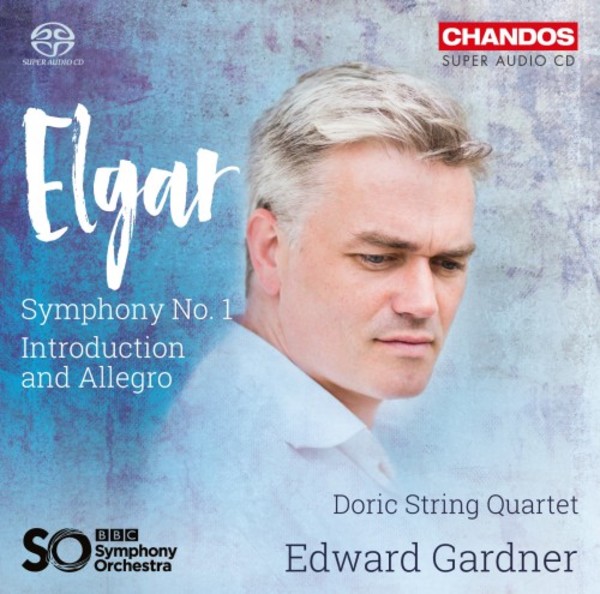 Elgar - Symphony no.1, Introduction and Allegro

Introduction and Allegro for strings, op.47
Symphony no.1 in A flat major, op.55

Introduction and Allegro for strings, op.47
Symphony no.1 in A flat major, op.55

This new Elgar surround-sound recording brings together some of Chandoss finest exclusive British artists for the first time.
The Doric String Quartet  highly praised for its series of Haydn and Schubert quartets  joins the BBC Symphony Orchestra under Edward Gardner in the Introduction and Allegro, one of Elgars masterpieces. Gardner here captures the subtle contrast between the solo quartet and the string ensemble, while also reconciling a wide variety of musical ideas and tempo fluctuations, not least the ever-popular Welsh solo viola melody. The full orchestra then appears in a passionate account of the majestic Symphony No.1, a much-loved work ever since its premiere in 1906.
As well as highly praised Walton and Britten recordings, the enduring relationship between Edward Gardner and the BBC Symphony Orchestra has seen successful series of works by non-British composers such as Szymanowski and Lutosławski.
Edward Gardner is also involved in recording projects with many other orchestras, including the Bergen Philharmonic, the CBSO, and the National Youth Orchestra of Great Britain, his latest new collaboration.

There have been a number of notable recent additions to the highly competitive discography of Elgars First Symphony, not least from the critically-acclaimed Daniel Barenboim and the Berlin Staatskapelle (on Decca), and Antonio Pappano with his Accademia di Santa Cecilia forces (ICA Classics). Any newcomer needs to offer something distinctive to stand out in the company of these and earlier classic performances, and this latest account, from Edward Gardner on Chandos, certainly does so.

For a start, Gardner has at his disposal the considerable talents of the BBC Symphony Orchestra, an ensemble which, when on form as it is here, can match any international competition. This, after all, is an orchestra which in its heyday was conducted by the likes of Toscanini, Walter and Strauss, not to mention such august chief conductors as Boult, Doráti and Boulez. In British repertoire, as in contemporary works, it can be matchless, and so it proves here. The strings, with guest leader Bradley Creswick, prove unusually sensitive and transparent, while the burnished brass really pack a punch in the big tuttis.

Gardners reading of the Symphony is a deeply considered one, not always high on drama, but taking an uninterrupted long view of the musics expressive arch. This approach works brilliantly in a work where the cyclical structure and symmetric pairings of the movements are so crucial. And how marvellous it is to hear a conductor taking Elgar at his word that this is absolute music, without any hidden programme or need for theatricals. Indeed, in his steady-as-she-goes reading of the second movement scherzo, Gardner seems to echo Elgars own approach; the busy first section is less demonic than Barenboim, making the later, more lyrical major-key material a closer relation: two sides of the same coin rather than a schizoid contrast. The transition to the glorious Adagio then seems more logical and human that it often does. As ever in Elgar, antiphonally divided violins pay huge dividends, not just in opening up the sound but in passages like the opening of the scherzo where phrases are tossed back and forth between firsts and seconds.

For all its surface Edwardian bluster and self-confidence, this is a work that has undercurrents of unease and insecurity, and Gardner allows these to emerge with total naturalness, helped by the responsiveness of the BBCSOs players. When the great opening melody reemerges at the Symphonys peroration, it sounds as completely logical as it would in a Beethoven or Brahms symphony, as well as bringing massive expressive resolution. This is above all a profoundly thoughtful and clearly thought-through performance, but one in which the orchestra as a whole recalls the great British orchestral traditions of yesteryear. As such, it can stand up to any recent competition, as well as such well-regarded classics as Handley, Hickox and even Boult.

Most recordings of the First Symphony, if they offer any coupling, tend to plump for one of the overtures. But Gardner again proves that less can most definitely mean more by opting instead for the Introduction and Allegro for strings, with the BBCSO string section joined by the excellent Doric String Quartet for another deftly-paced and texturally well-defined performance. The varying perspectives are superbly handled by the Chandos team (as they are throughout the disc), the famous Welsh theme which first appears on solo viola is exquisitely done, the fugue is dazzling in its clarity,and again the work builds to a glorious and noble climax. It makes a perfect curtain-raiser to the Symphony itself, as well as being a great performance in its own right.

The entirely natural sound-picture (with Surround Sound for those with appropriate equipment) and comprehensive presentation are of Chandoss highest standards, and we must hope for a similarly insightful account of the Second Symphony in the not-too-distant future!

Reviewing Vasily Petrenkos Elgar First Symphony two years ago, I thought it was unlikely to be beaten for a long while. After hearing Edward Gardner's version Im feeling slightly chastened. ... Ive rarely heard a performance of this Symphony in which the human triumphs over the monumental so convincingly. ... And every detail is clear and well placed in these excellent recordings  not least in the superb quartet-orchestra perspective in the Introduction and Allegro.  Stephen Johnson (Orchestral Choice)
BBC Music Magazine July 2017

With each new disc that arrives it becomes clearer and clearer that Edward Gardner is evolving into something really special. ... Gardners great strength is the vitality and rhythmic snap he elicits from the larger string body of the BBC Symphony Orchestra. ... Moving to the First Symphony, Gardner clearly appreciates that we are dealing here with a study in conflict and change, evolution and transformation, musical and actual. ... the winding-down of the transition into the slow movement  where our noblest aspirations are celebrated  is perfection from Gardner, and the Adagio itself is heartfelt, bringing some very lovely playing from the BBC SO ...  Edward Seckerson
Gramophone May 2017

Edward Gardner definitely puts refinement before moment-by-moment impact in his first venture into Elgar on disc. ...  the return of the motto theme that opened the symphony really does carry the weight  the great charity and a massive hope in the future  that Elgar imagined. Even Daniel Barenboims otherwise outstanding recent Decca recording cant make that wonderful resolution anything like as convincing as Gardner does.  Andrew Clements
The Guardian 13 April 2017