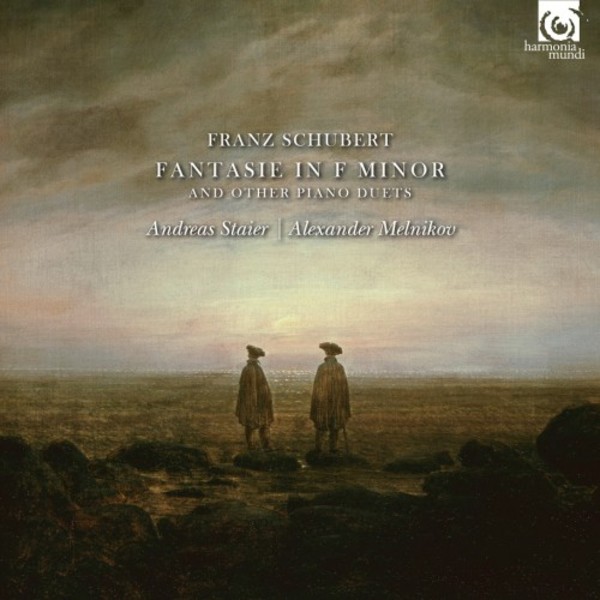 "I have composed a big sonata and variations for four hands, and the latter have met with a specially good reception here, but I do not entirely trust Hungarian taste, and I shall leave it to you and to the Viennese to decide their true merit." So wrote Franz Schubert in 1824, evoking the popular 19th-century genre for 4-hands piano that publishers were always pestering him to write for. In his brief life Schubert devoted 32 compositions to this form and the least of these pieces, be it a ländler, polonaise or march, radiates with all of his finesse and sensitivity. Three are incontestable masterpieces, in the same rank as his sonatas or quartets: the Variations D813, the Fantasie D940 and the Rondo D951. All three date from the composers final years, a period that gave birth to his most accomplished works.

In concert, Andreas Staier and Alexander Melnikov have played Bachs Well-Tempered Clavier, with Staier at the harpsichord, alongside Shostakovichs 24 Preludes and Fugues, with Melnikov at the piano. Sharing a keyboard evidently suits them just as well; their unique musical complicity bringing together four hands and two immense talents.

"Two very different but like-minded musicians, Andreas Staier and Alexander Melnikov, sat down together and offered a careful selection of these pieces...two musicians indulging in a Schubert feast of often outstanding quality... They breathed together, evolved together, gave each other wings. It is such a pleasure watching music being made through teamwork, even in  particularly in  the smallest of teams...

"Staier might as well have sung simultaneously, or instead of playing, such was his understanding and interpretation of those lines, behind which there is always a wordless Lied. The haunting opening theme in the Fantasy in F minor, D.940, with its pounding appoggiatura that stubbornly delays the perfect fourth interval that follows, defied any description."  Laura Furones, Bachtrack

Andreas Staier and Alexander Melnikov play a nut-warm, sweet-voiced fortepiano modelled after the kind of instrument Schubert would have known (for the cognoscenti: its a Graf copy by Christopher Clarke).

They open with the magnum opus of duet repertoire, the F Minor Fantasie, D940, but its not the moody, broody thing it tends to be on modern Steinways. The sound is more intimate, more spruce; high notes have a pearliness that make the melodies really ping, and whichever pianist is playing the upper part (Im guessing Staier  something about those flourishes) adds dainty ornaments that make the whole thing feel partly improvised.  Kate Molleson
The Guardian 27 April 2017

Schubert - Duos for Piano and Violin