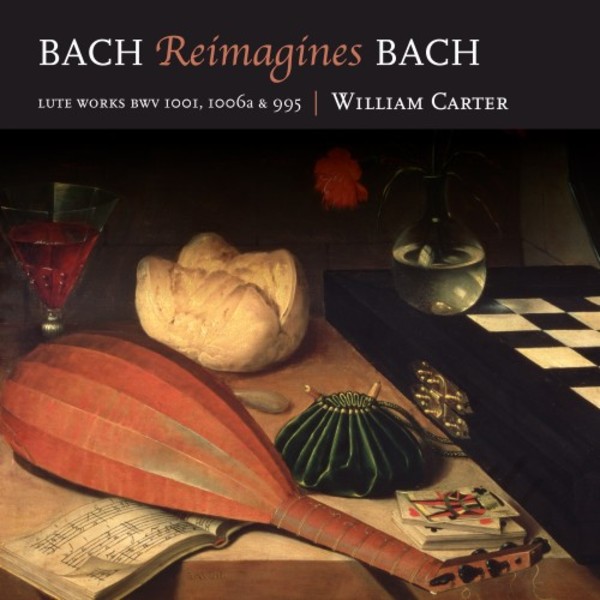 William Carters exemplary musicianship is showcased to its fullest on this new recording of Bachs own transcriptions for the lute. Almost unplayable in parts, many musicians take certain liberties with the music so that it flows more naturally, but Carters determined approach to authenticity sees the lutenist achieve the near impossible: playing the music as it was originally written.

Carter very subtly enhances BWV 1001, originally for unaccompanied violin, in keeping with Bachs own perceived style, namely to only add as much harmony as he found necessary. Bachs own mild refashioning of BWV 1006, originally a Partita for solo violin, allows Carter to highlight the relaxed and intimate nature of the music. The final piece, BWV 995, undergoes the most extensive reimagining as Bach expertly transforms the Fifth Cello Suite into a new lute work; so successful is it that Carter considers it to be, in terms of understanding the essential nature and expressive qualities of the lute, the most perfect piece of lute music in existence.

A founding-member of the Palladian Ensemble, Carter has a deserved reputation as one of the finest exponents of classical guitar and lute. He is well known as a regular performer at early music festivals with critically acclaimed performances as an orchestral player, chamber musician and soloist. Carter is principal lutenist of The Academy of Ancient Music and The English Concert with whom he has appeared on numerous recordings. Carters Linn discography has been widely praised: La Guitarre Royalle was named in Gramophones Critics Choice end of year list, he has been awarded Gramophones Editors Choice accolade twice: for La Guitarra Española and Sor: Early Works, whilst his most recent recording for Linn, Le Calme, was awarded an Opus dOr.

Carters sound is gorgeous... a guitarist of the highest stature. - Fanfare

Carter was a student of Nigel North, whose complete recordings of Bachs solo violin and cello music transcribed for lute is one of the jewels in Linn Records crown. He brings his former teachers devotion to seeing Bachs music as a language in which one must strive to be fluent with an ear for the colouristic possibilities of the lute born of years performing with orchestras and chamber ensembles. ... Tempos are, when compared with a player such as Hopkinson Smiths in the same works, somewhat on the leisurely side. Thats because Carter isnt in a hurry to get anywhere. He arrived a long time ago.  William Yeoman
Gramophone May 2017

Played with intimate understanding by William Carter. The introspective quality of his playing makes for some magical moments of stillness and relection and the focus of the recording itself adds to the effect.
Record Review (BBC Radio 3) 17 June 2017