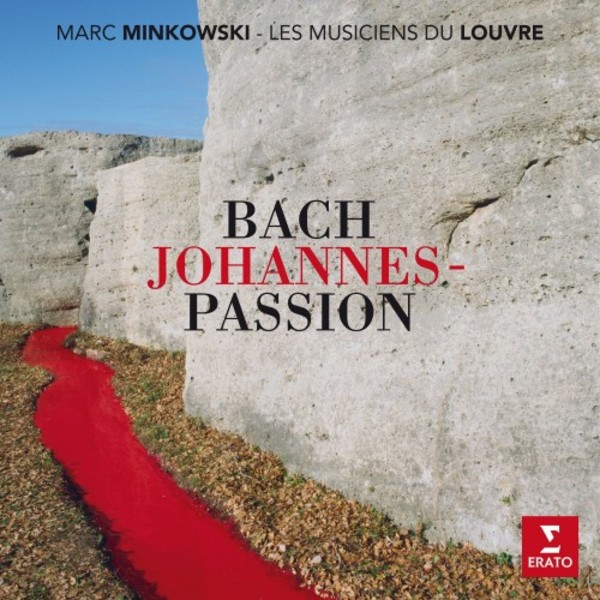 The foundations of Marc Minkowskis career lie in Baroque music, and he has enjoyed a long relationship with Warner Classics, but this Johannes-Passion (St John Passion) is his first Bach for the label.  The works terse drama  here presented through just nine singers  is ideally suited to both his scrupulous musicianship and his keen sense of theatre. The French conductor describes Bachs great masterpieces as a journey you have to prepare for meticulously, over a long period of time  You come back from it like an explorer comes back from Everest or the Moon  transformed.

For Bachs contemporaries, it was the ambitiously-scaled St Matthew Passion that was the Great Passion, and it was central to the 19th-century Bach revival by Mendelssohn and others. But the St John Passion  the composers earliest surviving setting of the Passion narrative  has its own distinctive qualities, partly on account of its unique theological emphasis on Christs kingship, but also because of its greater focus on the unfolding drama. With fewer contemplative arias and ariosos than the St Matthew, a profusion of gripping turba choruses (the crowd scenes), and such ear-catching sonorities as violas damore, an oboe da caccia, contrabassoon and lute, the St John is, for many, even more compelling. A clutch of new recordings seems to confirm this, and each of them has attractive qualities.

Pick of the bunch is the account on the Erato label from Marc Minkowski and his Musiciens du Louvre. Like many other performances in recent years, Minkowski opts for the sort of small-scale vocal forces now increasingly thought to have been used by Bach himself. There are just nine singers including all the soloists, with eight (two per line) used for the choruses (as suggested by the surviving manuscript parts), and they are outnumbered by an orchestra based on eight violins (four firsts, four seconds). Yet the balance is never skewed, and in the choruses and chorales the vocal lines come across clearly and (where necessary) forcefully. The recording followed concert performances by the same forces, and the experience shows in singing and playing of deep commitment and musicality.

Minkowskis Evangelist and Christus (tenor Lothar Odinius and bass Christian Immler) are native German speakers, and this pays dividends especially in the vividly communicative recitatives. Vocal and instrumental phrasing and dynamics are carefully considered but never micro-managed or fussy (something that too often marrs Gardiners recording on the SDG label). Of the other soloists, soprano Ditte Andersens voice has an attractively tremulous quality, while bass Yorck Felix Speer presents an unusually dark-toned and compelling Pilatus. Minkowski uses a countertenor (David Hansen) for the Part 1 aria Von den Stricken, and a female alto (Delphine Galou) in Es ist vollbracht: far from being a compromise, this combination seems to offer the best of both worlds, just one instance of the numerous strongpoints in this performance.

The opening chorus, underpinned by a rich continuo including contrabassoon, is urgent and turbulent, plunging the listener into proceedings in a manner akin to the even faster Egarr recording with the Academy of Ancient Music (2014). Under Minkowski, the turba choruses of Part 2 are exceptionally vivid and animated  taken at speeds that most choirs would find exceptionally challenging, but here delivered with clarity and real vehemence. Some might find the aria with chorus Eilt, ihr angefochtnen Seelen a little too rushed, but in context it works perfectly. It all gives the drama an unstoppable momentum completely at one with the underlying theology of the Johannine gospel, culminating arrestingly in the sudden searching inwardness of the three great arias, Es ist vollbracht, Mein teurer Heiland and Zerfliesse, mein Herze.

At the end of Part 1, Minkwoski appends two arias from the seldom-heard 1725 version of the score: the bass aria-with-chorale Himmel reisse, Welt erbebe and the tenor aria Zerschmettert mich. The latter, sung by Valerio Contaldo with just strings and continuo for accompaniment, is taken at an extraordinary lick, and emerges as one of the most spectacular arias in any of Bachs works, which is quite a claim! With a top-notch team of singers and instrumentalists, fine recording, attractive presentation and pricing, this is one of the very best St John Passions of recent years, alongside such critically acclaimed versions as the Dunedin Consort under Butt and the AAM with Egarr.

For those wishing to immerse themselves further in this fascinating music, or who perhaps prefer a more traditional choral approach, there are three other new recordings worth mentioning. Under Jeannette Sorrell, the performance by Apollos Fire on the Avie label offers a slightly larger, youthful-sounding chorus and stylish instrumental contributions, and the solo singing is committed without being absolutely top-drawer (some occasionally wayward German pronunciation). On KGS, the Choir of Kings College Cambridge under Stephen Cleobury has an enviable team of soloists including soprano Sophie Bevan, Iestyn Davies and bass Roderick Williams. With a seasoned Evangelist in the excellent James Gilchrist, and the experienced players of the Academy of Ancient Music, this is another recording to savour, especially for listeners seeking a more measured approach to speeds (dictated in part, perhaps, by the Kings Chapels extraordinary fan vaulting?), and the sound of boys voices in Bachs choruses is always a welcome one.

Finally, on Chandos the Crouch End Festival Chorus and Bach Camerata under David Temple place themselves in a class of their own, not just through sheer numbers (this is a large choir, with no fewer than 30 sopranos, 29 altos) but by being the first recording in English since the famous (and now rather dated) account from Benjamin Britten and Peter Pears. For Anglophone collectors, Neil Jenkinss sympathetic translation has a special immediacy, and the solo team is again a fine one (Sophie Bevan and Neal davies appear on both this and the Kings recording). Overall, its a model combination of tradition and stylishness.

This passion is brutal from the start: bass notes in the opening chorus are full of threat, a contrabassoon added for extra thud. But its also punctuated with sudden and devastating gentleness. Try one of the silky chorales or an aria like Mein teurer Heiland to see what I mean.  Kate Molleson
The Guardian 27 April 2017

... the eight-strong ensemble is unerringly committed to text in Herr, unser Herrscher, which is taken quickly by Minkowski and played vividly by Les Musiciens du Louvre, including the extra thump of the contrabassoon as added by Bach in 1749. ... the last furlong of the work turns out to be deeply moving: Delphine Galous heartfelt Es ist vollbracht!, Christian Immlers articulate singing in juxtaposition to the underlying chorale in Mein teurer Heiland and the sustained beauty of phrasing in Ruht wohl are all judged beautifully.  David Vickers
Gramophone May 2017

[Minkowskis] long experience with French Barqoue music is everywhere palpable, lending balletic grace to the dance-inspired numbers, delicacy to the wind figurations, and a driving energy to the whole, which spirals inexorably to its conclusion. His orchestra, far from providing mere accompaniment, is as vital a protagonist as the singers.  Kate Bolton-Porciatti
BBC Music Magazine September 2017