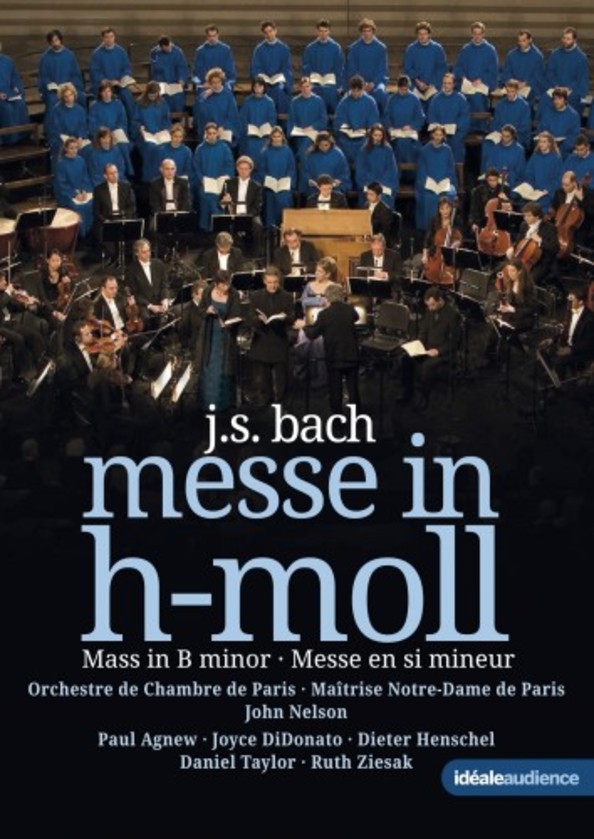 Johann Sebastian Bachs Mass in B minor is a pinnacle of Western music for classical music lovers, and today it is one of our most beloved sacred classics. The live performance of this monumental piece of music at the Cathedral of Notre-Dame, with John Nelson, the Ensemble Orchestral de Paris and the Maîtrise de Notre-Dame choir creates an astounding musical and spiritual experience.
John Nelson is internationally renowned for his interpretation of the large romantic repertoire and sacred music. Featuring international star soloists Ruth Ziesak, Joyce DiDonato (Grammy and the ECHO Klassik award winner), Daniel Taylor,  Paul Agnew and Dietrich Henschel.
Including extensive bonuses: Interview with John Nelson and the Archbishop of Paris, Introduction to the Mass in B minor.
In a short interview before this concert in Notre-Dame Cathedral, John Nelson calls this performance a culmination of my experience with Bach and it is one which is characterised by the conductors highly considered and distilled understanding of the score. - Gramophone
Close to being an act of worship. - BBC Music Magazine
Watching this film is life-enhancing. - International Record Review
An all-star cast ... virtuoso choral singing ... one of the best ever. - The Philadelphia Inquirer
Intensely expressive and meticulously shaped ... will bring a lump to your throat. - Fanfare Magazine
Bonus
- Interview with Mgr Vingt-Trois, Archbishop of Paris
- Interview with Mgr Vingt-Trois and John Nelson
- Interview with John Nelson
- Mgr Jehan Revert introduces the Mass in B minor
- Notre-Dame de Paris: Music and Liturgy
Picture format: 16:9 NTSC
Sound format: PCM Stereo, DD 5.0
Region code: 0 (worldwide)
Running time: 110 mins concert, 43 mins bonus, 153 mins total
Language: German
Subtitles: English, German, French
Production years: 1993, 1994, 2008