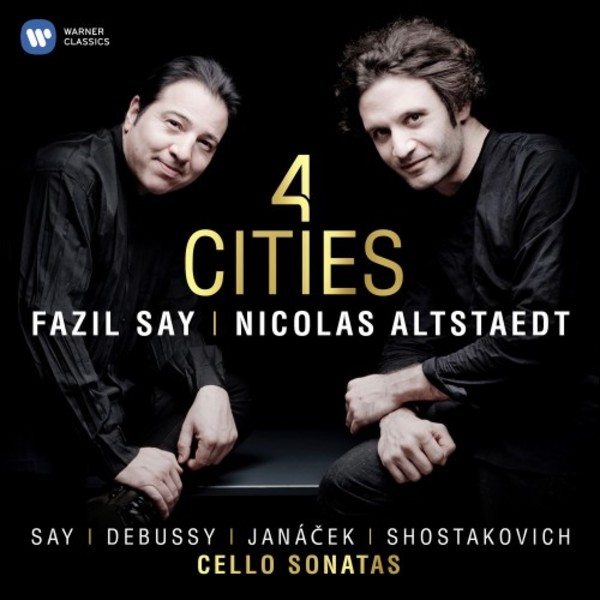 This bracingly eclectic recital opens with Fazıl Says Four Cities, a musical celebration of four Turkish locations the composer describes as full of personal memories. Originally a BBC commission, it was premiered in June 2012 during the City of London Festival by Nicolas Altstaedt and José Gallardo.

4 Cities is a dive into the world of poetry, mysticism, into the history, the secrets and passions of the Orient.I have never been more fascinated exploring the miracles and the stories of peoples daily life challenging the limits of my own instrument. The cello is transformed into a flute, a fiddle, a percussion instrument until it becomes the voice of the people inviting us to a world that feels  closer to us than ever before having encountered it through its music.  Nicolas Alstaedt

This new disc from Warner Classics is a collection of cello sonatas with a difference. For a start, theres not a German composer in sight (no Beethoven, no Brahms), and cellist Nicolas Alstaedt very much shares the limelight with Fazıl Say, who not only accompanies him in notably equal partnership, but composed the title work, Four Cities, a bracing and dazzling tour of four locations in Says native Turkey. Originally a 2011 BBC commission, it is awash with local colour, and replete with references to Turkish tunes. Theres also a mischievous wit at work here  Say himself has been a vocal critic of the Erdogan/AKP regime  and Ankara, the Turkish capital, is coloured by brutal, metallic effects from the piano, while the western resort city of Bodrum is initially all laid-back jazzy good spirits before culminating in a bar brawl. The first two movements are more exotic, the central city of Sivas wistful, with magical piano cascades and the cello conjuring mellifluous, flute-like tones, while the eastern Hopa bursts crazily into life with wild pyrotechnics from the cello. Both Altstaedt and Say reveal themselves as masters of colour on their instruments, and the whole work is a real showstopper.

The pairs delight in timbral variety and tone colour infects the other work on the disc, too. Debussys Cello Sonata, written after a period of debilitating illness, has seldom benefited from such a range of light and shade, the commedia dellarte-influenced Sérénade delivered with a real twinkle in the eye, every pizzicato note made to count, while the brilliant finale flows along with complete naturalness and telling rubato. Nor is it all show: theres a tender reflectiveness to the central episode that is all the more effective for the contrast it provides with the outer sections.

In Janáček's Pohádka (Fairy-tale), based loosely on the same Russian folk story that Stravinsky uses in LOiseau de feu, Altsaedt and Say successfully reconcile the abundant, energetic surface detail with the wider-arching lyricism, a skill that still eludes many a performer of Janáčeks music. The central movement is again all delicate pizzicati, almost pointillist in places, but with real depth of feeling. After the buoyant final movement, the performers add an attractive bonus in the form of Janáčeks stirring but little-known Presto for the same instruments. Whether or not it was intended at some point as part of Pohádka, it makes a delightful pendant.

Shostakovichs Cello Sonata may be less obviously colourful than the other works on the disc, but Altstaedt and Say bring to it a delicacy and subtlety of shading that is both welcome and completely beguiling. There is fullness of expression here without weightiness, speeds are generally brisk, and the more reflective passages in the long opening movement have never sounded more meltingly gorgeous. Other performances may bring out more of a demonic subtext in the second movement Allegro, but none have danced as much as this one, and the transparent cello harmonics in the trio section are enchanting. After a searching account of the great Largo, the last movement wears its sardonic humour lightly, a youthful performance but one still underpinned by musical wisdom. The Shostakovich as a whole sets the seal on a remarkable recital from two exceptional musicians. Time will tell whether Altstaedt will join the ranks of the giants among cellists, but on the evidence of the present disc (atmospherically recorded in the Great Hall of Salzburgs Mozarteum), the signs are extremely promising!

I defy any musically responsive youngster who yawns at the prospect of listening to a work for cello and piano to leave Four Cities without wanting to hear it again. It is youthfulness personified and the performance is stunning. ... [In Shostakovichs Cello Sonata] Say and Altstaedt demolish the neoclassical façade and reveal that burning anxiety for all its worth, especially in the opening Allegro non troppo, a reading that turns on the heat like none other Ive heard in recent years.  Rob Cowan
Gramophone May 2017