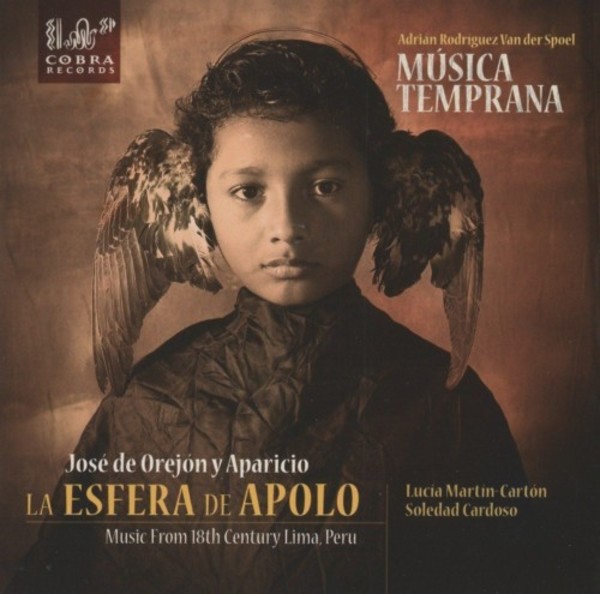 Jose de Orejón y Aparicio was the first Latin American-born musician who was appointed in Lima as Kapellmeister. The life of this forgotten eighteenth-century master coincides with a peak in the cultural development of the Peruvian capital. Orejón represents italianization of music with virtuoso outbursts for violin and vocals. His music is both typical Peruvian with powerful themes, delicate harmonies and energetic rhythms.

Only 19 works by the mestizo priest, organist, singer and composer José de Orejón y Aparicio have been preserved, but these offer quite enough for an understanding of the importance of his music. However, he wrote more works, as an inventory of 1809 recognizes 39 compositions of his. Two decades after his death he was already being referred to as El Huachano Nebra, a nickname he earned because of his home town and his talent, comparable with the famous Spanish composer José de Nebra.

This CD is the first European recording devoted to the work of the great master of Lima. It comes accompanied by the hope that his name will be associated with the great composers of the period such as Nebra, Literes, José de Torres. Música Temprana explores the repertoire from the Renaissance and Baroque periods, not only in Latin America, but also from sources of the Spanish Empire of that era. Through this Música Temprana wishes to map the musical development in Latin America from the moment the first conquistadores set foot in the New World up to the coming of age of baroque music on Latin American soil itself.

The ensembles repertoire is mostly the result of own research by the founder and conductor Adrián Rodríguez Van der Spoel. Since the first concert in 2001 the ensemble released six CD records and organized performances in important specialized festival, such as the Festival Oude Muziek in Utrecht, the Trigonale in Austria, the Old Music Festival in Stockholm, the Mozart Festival in Rovereto, Italy, and Musica Sacra in Maastricht.