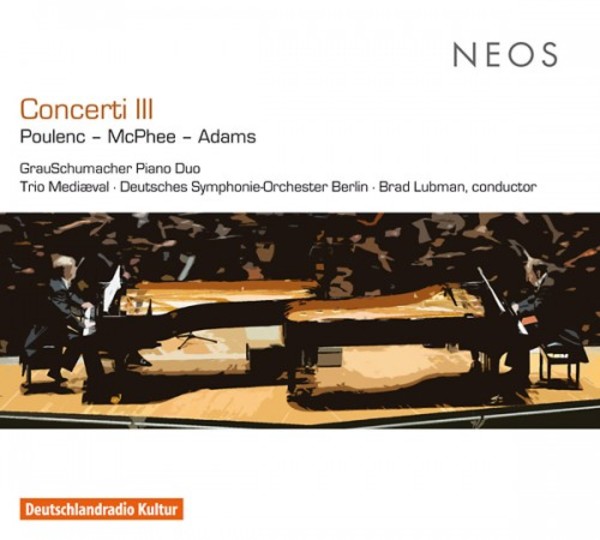 Concerto in D minor for 2 pianos and orchestra

Concerto in D minor for 2 pianos and orchestra

When American composers bade farewell during the 1960s to the cerebral exercises of the European avant-garde substantiated by historical-philosophical considerations, proclaiming the cult of a new simplicity, they also did this with reference to African drumming rituals, Indonesian gamelan music, pop-art and pop-music. They called the result minimal music, whose most important characteristic, as with the gamelan, was repetitive patterns above a steady beat; these are transported into other musical aggregate states by means of gradually increasing (at first almost unnoticeable) disturbances, irregularities and phase shifts. Together with the re-enthronement of the major and minor keys, these procedures frequently created psychedelic effects  by no means unintentionally.

John Adams has provided a particularly vivid report on the stimuli that led him to compose his Grand Pianola Music: he dreamt that he was driving on Interstate Highway 5 when he was approached from behind by two black stretch-limousines; when they passed him, they were transformed into the worlds longest Steinway pianos and then fired salvos of B flat major and E flat major arpeggios at 90 miles per hour. Another important stimulus was the recollection of having walked through the halls of the San Francisco Conservatory and heard the sonic flood of twenty or more pianos playing Chopin, the Emperor Concerto, Hanon, Rachmaninoff, the Maple Leaf Rag, and much more.