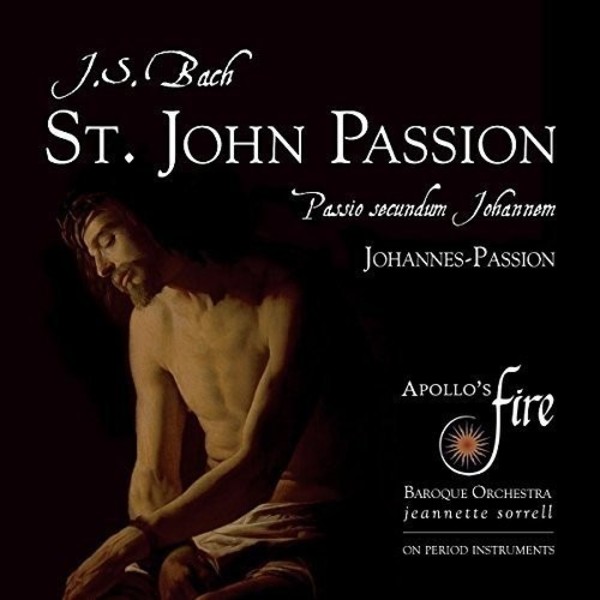 This magnificent recording of J.S. Bachs groundbreaking masterpiece, the St John Passion, is the result of Jeannette Sorrells visionary concept of a dramatic production which was presented in seven acclaimed performances in Cleveland and New York City in March 2016. Leading her Cleveland-based baroque orchestra Apollos Fire, the Apollos Singers and a stellar cast of soloists including tenor Nicholas Phan as the Evangelist, baritone Jesse Blumberg as Jesus and baritone Jeffrey Strauss as Pilate, Sorrells vision brings immediacy and clarity to Bachs dramatic setting of the Passion story according to the gospel of St John.

The deluxe package includes an extensive and illuminating booklet that features memorable action photos from the production.

A resplendent performance... The production belonged entirely to Ms. Sorrell, who devised the concept, which she called a dramatic presentation... Jesse Blumberg sang the role [of Jesus] handsomely and acted vividly. Nicholas Phan sang the Evangelist beautifully, with unusual animation and dramatic vehemence. Jeffrey Strauss turned Pilate into a living, breathing figure for a change. The chorus allowed Ms. Sorrell some exquisite moments... breathtaking. - The New York Times

A superlative performance... Sorrell ensured that there was no lack of drama. The excellent orchestra and chorus proved capable of producing an engagingly colorful sound at full volume but also finely nuanced effects. Consistently alert and dynamic, the chorus was especially vital. - Musical America