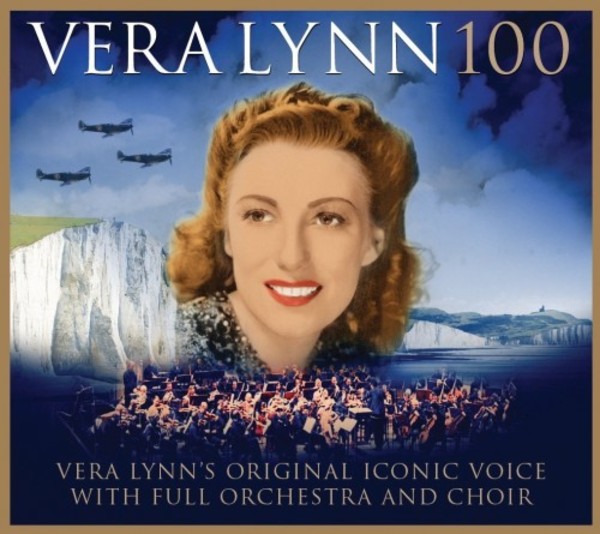 Celebrating 100 years of a UK National Treasure with brand new orchestral versions of her most beloved songs.

A true icon, Vera Lynn reaches her 100th Birthday on 20 March 2017. To celebrate this milestone, the newly recorded album, Vera Lynn 100, features Vera Lynns utterly distinctive original vocals set to completely new re-orchestrated versions of her most beloved songs. This technical wizardry has, for the first time, allowed full orchestral accompaniments to transform not only her most memorable and morale-boosting hits that sustained Britons through the wartime years, but some recently unearthed, rare recordings  all presented in sumptuous, up-to-the-minute sound. Veras vocal on the lead track, Sailing, has not been heard for 35 years. The album also features several duet partners including Alfie Boe, Alexander Armstrong, Aled Jones and the RAF Squadronaires.

Tracklisting:
1. Well Meet Again, feat. Alfie Boe
2. Sailing
3. (Therell Be Bluebirds Over) The White Cliffs of Dover, feat. Alexander Armstrong
4. Wish Me Luck As You Wave Me Goodbye
5. As Time Goes By, feat. Aled Jones
6. Auf Wiedersehn Sweetheart
7. The Loveliest Night of the Year
8. When You Wish Upon a Star, feat. Cynthia Erivo
9. A Nightingale Sang in Berkeley Square, feat. The Ayoub Sisters
10. Im Forever Blowing Bubbles
11. Close to You
12. Yours, feat. RAF Squadronaires