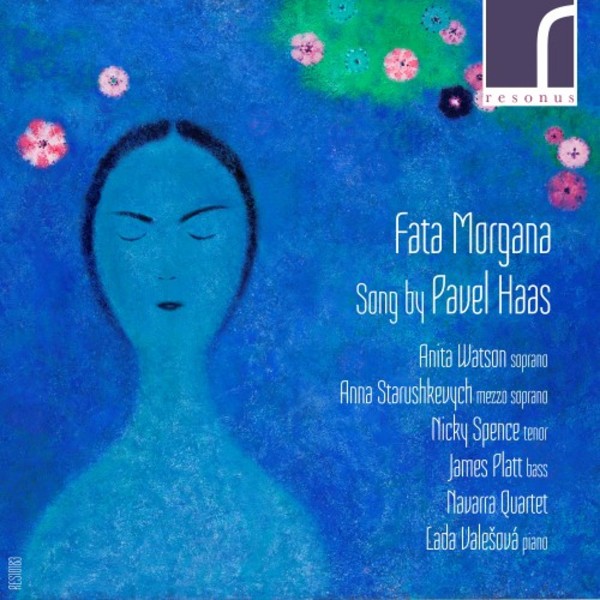 Pianist Lada Valeová is joined by an exceptional array of singers as well as the acclaimed Navarra Quartet in a vivid portrait of this neglected composer.

Few composers talents have been snuffed out as brutally as that of Pavel Haas. A Czech Jew, Haas grew up in Brno and studied in Janáčeks masterclass in 1920-22 before making his mark with a distinctive musical style that blended folk and Hebrew inflections with the influence of jazz rhythms. Though cruelly curtailed by his 1944 murder in the Auschwitz gas chambers, Haass output includes such notable works as the opera arlatán (The Charlatan, 1938), the Study for Strings (composed in 1943 while resident in the Theresienstadt concentration camp), and three string quartets which have been championed in recent times by, among others, the brilliant Pavel Haas Quartet on Supraphon. Another genre that Haas made his own was that of song, and this new disc from the ever-enterprising Resonus label includes works that range from his time as Janáčeks student to one of his very last works from Theresienstadt. Brilliantly masterminded by pianist Lada Valeová, who also coached the singers in the Czech language, it embraces four song cycles whose contrasting flavours are tellingly highlighted by using a different singer and voice range for each.

Earliest are the Chinese Songs, op.4, of 1921, sensitively sung here by Ukrainian-born mezzo-soprano Anna Starushkevych, and they already demonstrate Haass gift for grateful vocal lines and finely-coloured accompaniments. These are reflective works, and Starushkevych captures their inwardness without sacrificing beauty of tone. The real discovery, however, comes with the two-part song cycle Fata Morgana, op.6 (1923), to five poems from Rabindranath Tagores The Gardener. Janáček had already set Tagores The Wandering Madman as a chorus in 1922, but Haass cycle, for the beguiling combination of tenor, piano and string quartet, is more redolent of the older composers Diary of One Who Disappeared. The extended instrumental interludes and string textures also bring to mind the musical expressionism of Schoenberg and Berg, and enhance the exotic aspect of the texts, which tell of the torments of love and desire and an ephemeral vision of a lost love. Tenor Nicky Spence is superb at conveying the heady sensuality and at times unbridled passion of the texts, while Valeová and the Navarra Quartet bring out the myriad colours of the score to perfection. This is Fata Morganas first commercial recording, and it is a major event, for this is a work that transcends the limits of the song-cycle genre and deserves the widest possible circulation.

The best part of two decades separates Fata Morgana from the Seven Songs in Folk Style, op.18, of 1940, yet youd be hard pressed to detect that these later works were written after the Nazi occupation of the Czech lands. The settings of F.L. Čelakovskýs folk poetry paraphrases have a wonderfully carefree feel to them, but the maturity of the compositions is evident in the extensive and powerfully evocative piano interludes and postludes. Haas had a talent for imbuing such passages with poetic import, and he also had a gift for effectively deployed pungent harmonies and intensifying ostinato patterns which raise these delightful pieces above the folk genre they notionally inhabit. Soprano Anita Watson has exactly the right vocal qualities to bring out the music's folk flavours while adding an extra expressive edge: her voice is redolent of some of the best Czech sopranos here, a tribute to Valeová's coaching.

Latest of all  and, in fact, Haass last surviving work  is the Four Songs on Chinese Poetry, already familiar in several other recordings, but here lent extra weight by James Platt's darkly-hued bass voice. Both the poems and the settings themselves alternate between the intense introspection of the exile longing for home and a devil-may-care exuberance which is especially affecting. The hypnotically mysterious chords that introduce the final song are but one instance of Haass genius as a song composer, in a work that ends (at least on the surface) in high spirits. Yet dip into any of these cycles at just about any point and the listener will detect a similar genius at work. Had he lived, Haas would surely have been the leading Czech composer of the post-war years. This splendid collection, graced by excellent notes from Haas expert Martin Čura and with full texts and translations, does him a handsome service.

Europadisc Disc of the Year for 2017!

Haass brutal murder in a Nazi death-camp alongside others of his generation remains an incalculable loss to western music, which may otherwise have taken very different directions post-World War II. ... Pianist-musicologist Lada Valeová has gathered together a stellar group of youbg singers and musicians. Fata Morgana refers to the Tagore song cycle completed by Haas following studies with Janáček (1923)  and which receives an impassioned premiere recording by Nicky Spence and the Navarra Quartet alongside Valeová. ... From joy to despair, every emotion is here in subtle colours; a legacy of great human and musical worth.  Steph Power (Choral & Song Choice)
BBC Music Magazine May 2017