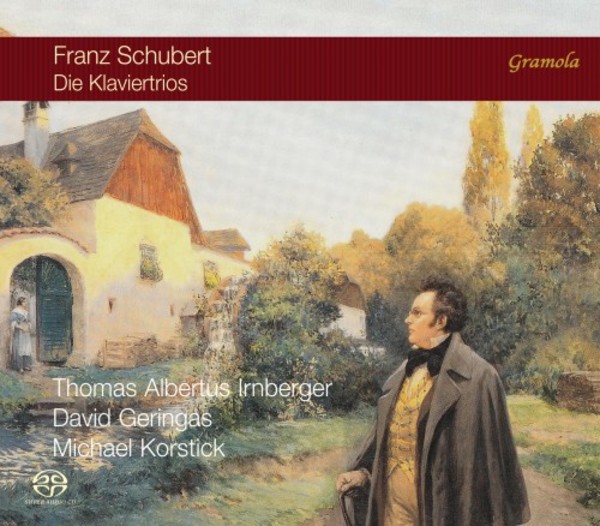 Secretly, I hope to make something of myself, but after Beethoven who can do anything? These words by the juvenile Franz Schubert might explain why it took him 15 years  until 1827, just one year prior to his death  to begin writing both of his great piano trios, works of epic, almost symphonic dimensions. This new interpretation by violinist Thomas Albertus Irnberger with David Geringas, cello, and Michael Korstick, piano, works out the lyricism and thematic work as well as the affects and discontinuities which illustrate the large influence, that Beethovens composing had on Schuberts oeuvre. Similar effects can be observed with the Notturno D897, in contrast to the Trio movement Allegro D28, which being an early work exhibits closer ties to Mozart.

Thomas Albertus Irnberger: many awards, performances at international festivals and co-operations and recordings with musicians such as Jörg Demus, Evgeny Sinaiski and Paul Badura-Skoda as well as with the Israel Chamber Orchestra conducted by Roberto Paternostro and the orchestra Spirit of Europe under its principal conductor Martin Sieghart stress the young Salzburgers musical skills.

Born in Vilnius, Lithuania, the cellist and conductor David Geringas is today numbered among the elite of music. His intellectual severity, stylistic versatility, his melodic feeling and the sensuality of the sound he produces have brought him awards from all around the world.

For his CD recordings, which have received excellent reviews in music magazines and journals, Michael Korstick has been awarded the Echo Klassik Prize, the Prize of German Record Critics several times and the MIDEM Classical Award.