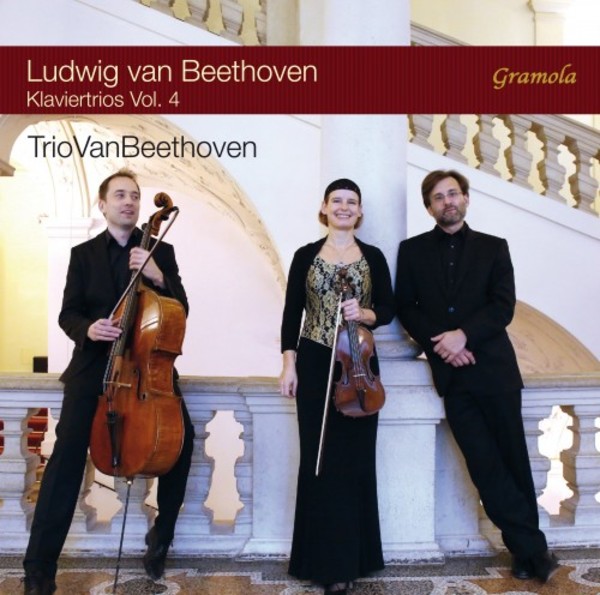 Volume 4 of the complete recordings of Beethoven's piano trios by the Austrian TrioVanBeethoven opens with the Trio Op.1/3 in C minor. Preceding this last work of the group of piano trios Op.1 (1793/94) were a great number of uncounted works and sketches like the Variations Op.44, whose first drafts can be dated back to as early as the year 1792. The famous Gassenhauer Trio Op.11 which was originally written for clarinet instead of the violin, got its sobriquet (the term Gassenhauer was initially used to describe the songs which night-time revellers, perhaps no longer entirely sober, sung while making their way home, often disturbing the slumbers of solid citizens) from the final movement of the work, comprising variations on a then very popular melody from the opera Lamor marinaro ossia Il corsaro by Joseph Weigl from 1797. The simplicity of this tune in contrast to the normally more serious and complex writing of Beethoven enthused his contemporary critics, and it was advocated he were to write more natural rather than strained pieces.

Why van Beethoven? Beethoven stands for independence of mind, for revolutionary ideas, for music that reaches far beyond his own time. Beethoven was a lone wolf, but at the same time the central point of departure for new traditions of composition, such as the lineage from Brahms to Schoenberg.

In its foundation year in 2011, the Trio held its debut at the renowned Festival Tage der Alten Musik in Herne (Germany). Since then, the ensemble has appeared in Austria, Germany, Italy, France, the UK, Poland, Serbia and Greece. Recently, the TrioVanBeethoven has set accents with two concert series in Upper Austria (Kremsegg Castle) and Styria (Rein Monastery). The trio is releasing a complete recording of the piano trios by Ludwig van Beethoven for the eminent Austrian label Gramola.