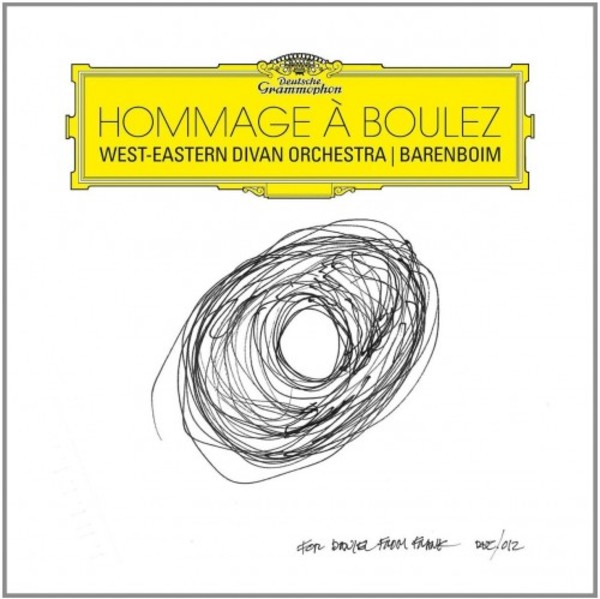 Hommage à Boulez celebrates Daniel Barenboims and Pierre Boulezs association, starting in June 1964, that for length and multifariousness, has few parallels in the history of music.

Boulez became the first musician that Barenboim invited to share in conducting the West-Eastern Divan Orchestra (in 2007, at the Salzburg Festival).

Boulez conducts members of the WEDO and Hilary Summers in his own work Le Marteau sans maître.

The release of this album coincides with the opening of another Barenboim initiative to remember his colleague and friend: the Pierre Boulez Saal, in Berlin. Built within the Barenboim-Said Akademie to a design by Frank Gehry, this provides an intimate concert setting for an audience of up to almost 700 seated all around the performers. With Barenboim conducting Boulez again at the opening concerts there, the story goes on.

The Pierre Boulez Saal, just one of the many fruits of a lifelong professional friendship with Daniel Barenboim, creates an ideal space for the ever-changing needs of classical and contemporary music, which Pierre Boulez so passionately sought to share.  Pierre Boulez Saal website

The three works on the first disc  dominated by a fabulously lucid account of the tangled, challenging Dérive 2, for 11 instruments  are from the 2012 Proms in London, while the second disc includes recordings from the Berlin Staatsoper in 2010.

Theres Messagesquisses, for solo cello and six other cellos, and Anthèmes 2 for violin and live electronics, played by Michael Barenboim, thus echoing his recent solo disc, but the main work is Le Marteau Sans Maître, conducted by Boulez himself with Hilary Summers as the contralto soloist. By my reckoning, this is Boulezs fifth recording of the work that defines his own music better than any other; its perhaps more expressively flexible than earlier ones, but just as precise, and Summers makes a compelling soloist.  Andrew Clements
The Guardian 16 March 2017

Boulezs timbres have a crystalline beauty and an underlying lyricism born of a poetic German-French sensibility; Berg, for instance, haunts Dérive 2, while Messiaen is palpable in the shadow-boxing, soloist-plus-electronics Dialogue de lombre double (clarinet) and Anthèmes 2 (violin). ... Dérive 2 is simply breathtaking: in compositional scope and its precise yet fluid performance by the 11 virtuoso soloists under Barenboims taut direction.  Steph Power
BBC Music Magazine July 2017