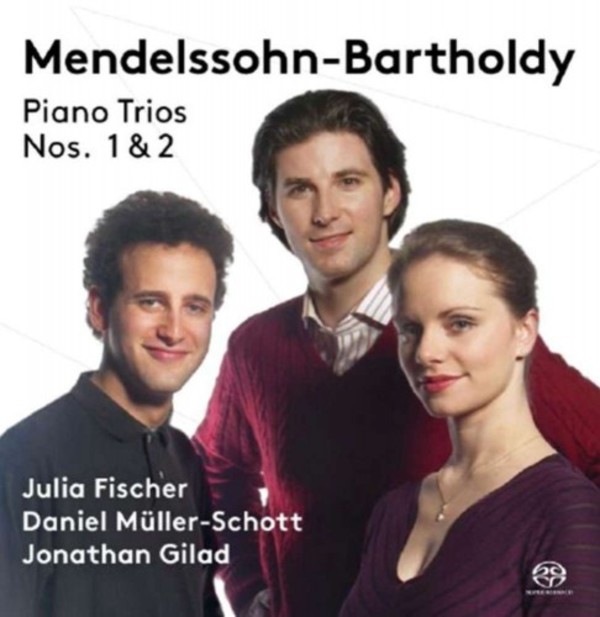 There are few composers who simultaneously exemplify both restraint and innovation as well as Felix Mendelssohn-Bartholdy. Mendelssohn's two piano trios provide some of the finest examples of the balance he was able to achieve between deference to the great masters, in this case Ludwig van Beethoven, and a more Romantic sensibility for chromaticism, harmony and orchestration. A noted pianist in his own right, Mendelssohn performed the piano part in the premieres of both trios, along with Ferdinand David on violin and Carl Wittmann on cello. In this Pentatone reissue (originally released in 2006) these roles are filled by violinist Julia Fischer, cellist Daniel Müller-Schott and pianist Jonathan Gilad.

The contrast between the two piano works is striking. The Piano Trio in D minor was written in 1839, during the artistic and personal zenith of Mendelssohn's career. After years of remarkable success all over Europe, his appointment as director of the Leipzig Gewandhaus concerts in 1835 ensured that he could finally began to settle down in Germany, secure in his financial prospects. Two years later, Mendelssohn married and appeared to relish his new life as a husband and father of five. The first piano trio clearly reflects this elated mood, with lively dance movements and joyful, lyrical themes that this release manages to capture perfectly. In contrast the Piano Trio in C minor, written only five years later, reflects a much more tumultuous period in Mendelssohn's life. His mother had died in 1843 and his health was beginning to turn for the worse, culminating in a fatal stroke on 4 November 1847. Musically, this contributed to a period of dark timbres, tense tempos and increased chromaticism. Even during this gloomy time the tone is more understated than melodramatic, tending towards a more subtle form of subversion which is even more difficult to pull off, and all the more enjoyable when performed as convincingly as it is by Fischer, Müller-Schott and Gilad.