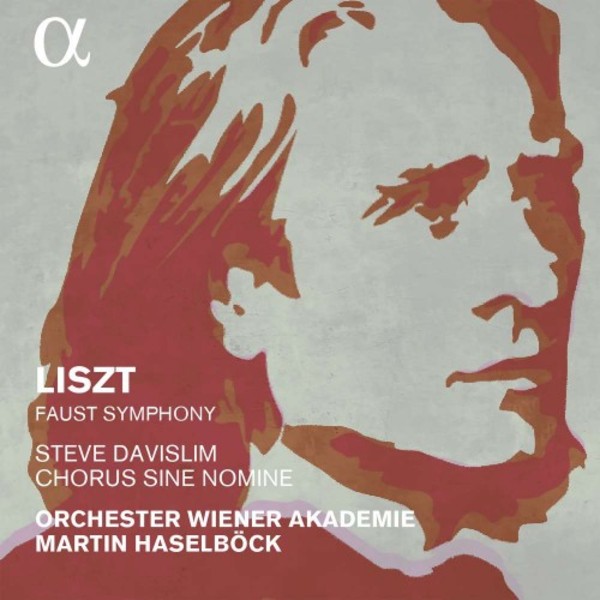 The Faust Symphony undoubtedly constitutes one of the principal works of Liszts Weimar period, if not indeed his orchestral masterpiece. Liszt had become acquainted with Goethes poem Faust in 1830, in the French translation of Gérard de Nerval. He began composing the work in the 1840s, after a visit to the Goethe House in Weimar. Its first performance was arranged for September 1857, to mark the centenary of Grand Duke Carl August and the erection of a statue to Goethe and Schiller. On this occasion Liszt rounded the work off by adding a tenor solo and chorus at the end. The premiere took place on 5 September. This musical transposition of the poem is performed here by the Orchester Wiener Akademie under Martin Haselböck, and follows their recording of Liszts transcriptions of works by Schubert, released in 2015 (Alpha471). In parallel with this, the Viennese period-instrument orchestra is also continuing its Resound Beethoven project, the recording of the complete symphonies at the venues of their first performances.

Its six years since Martin Haselböck and his Orchester Wiener Akademie began their exploration of Franz Liszts orchestral music, initially on the New Classical Adventure label (five volumes), with a single release on CPO (the Hungarian Rhapsodies) before moving to Alpha for a disc of Schubert-Liszt transcriptions. Their latest release tackles what many regard as Liszts orchestral masterpiece, the once neglected Faust Symphony. The works full title is A Faust Symphony in Three Character Pictures, and theres character here in abundance, thanks to the superb playing of the period-instrument orchestra. Faust, Gretchen and Mephistopheles (the subjects of the symphonys three movements) each leap vividly off the page with uncommon clarity and textural transparency. Tempi are generally brisk, so that there is an inexorable momentum until the radiant choral close of Liszts revised ending, with the same lines from the end of Part 2 of Goethes Faust that Mahler set in his Eighth Symphony.

What strikes the listener most forcibly in this new recording is how much of the music suddenly makes sense when played on period instruments and in an historically informed style. Like much of Berliozs output, Liszts writing here is not the sort that requires a blended orchestral sound: individual character is everything, and it is essential to hear the various sonorities each playing their individual part. The works very opening  where theres a real bite to the initial accent on violas and cellos  is an immediate case in point. So too is the solo string playing in the central Gretchen movement, which perfectly captures the characters artless simplicity. Before that, the first movement has the measure of Fausts troubled, questing character, but there is also a real swagger (not overdone) to the big martial theme, with period brass and thwacking timpani sounding resplendent. Only die-hard anti-authenticists might take against the largely vibrato-less strings, but the woodwind are brilliantly characterful throughout, whether in their individual solos or en masse with the brass where Haselböck  an organist by training  coaxes some organ-like registrations from them in the chordal writing.

As for Mephistopheles, he has surely never sounded so sardonically menacing as he does here, with glints of mischievous humour colouring his evil designs. As in the first two movements (and, indeed, the Beethoven recordings from the same team), Haselböck uses the natural expressivity of the period instruments rather than any interpretative pyrotechnics to bring the music to life, and its a joy to hear, making sense of what, in other hands, sounds like so much episode rambling but which suddenly, miraculously takes on a remarkable cogency.

The transition to the choral epilogue is perfectly judged; the men of the Chorus Sine Nomine sound fewer than on some rival recordings, but make a fine sound alongside sensitive tenor soloist Steve Davislim, and the hymn to the Eternal Feminine is profoundly moving, with Haselbòck himself at the organ (presumably overdubbed). In terms of sheer decibels, the close may be less overwhelming than others, but the cumulative effect of the performance as a whole is quite unlike any other. Period performances are often compared to stripping away layers of varnish and dust, but this one really is worthy of the metaphor: its little short of revelatory. Even if this work has eluded you in the past, you should try this disc: everything suddenly falls into place, the longueurs vanish, and what the listener is left with is a work of astonishing immediacy and engagement. This is not a retelling of the Faust story, but a thrillingly lifelike vision of its central characters, in music that constantly surprises and delights. It should win Liszt many new admirers: in its way, this is as pioneering and evangelical as anything Beecham or Bernstein did for the work, and no praise is higher than that.

[Haselböck] reveals aspects of Liszts scoring that would otherwise go unnoticed. ... with Haselböck, you begin to understand Liszts sound world as he understood it, more or less, though whose interpretation he would have favoured is anyones guess.  Rob Cowan
Gramophone May 2017