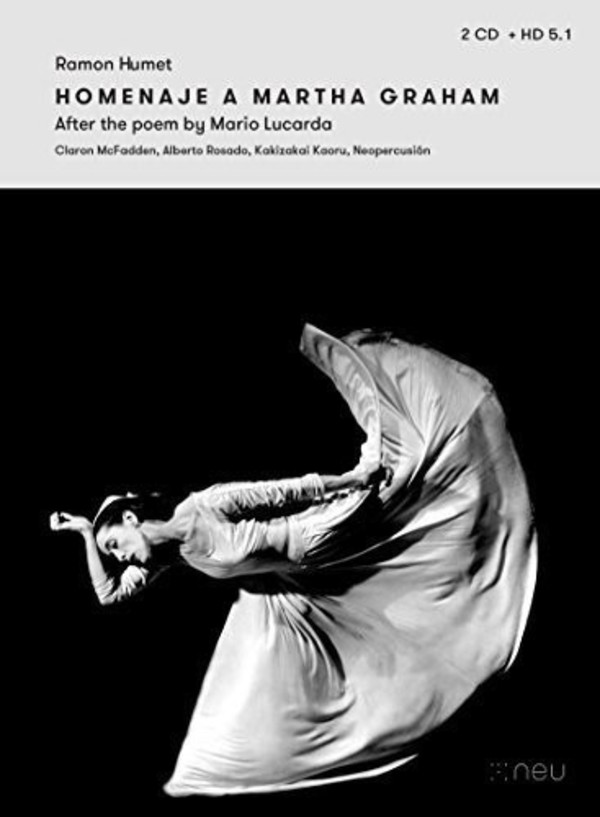 Ramon Humets Homage to Martha Graham was created, as its title indicates, in tribute to the hugely influential American dancer and choreographer, Martha Graham (1894-1991), pioneer of contemporary dance.

Written between 2006 and 2013 by the Barcelona-born composer, Humets work comprises a cycle of nine songs for soprano and piano after the poem Homenaje a Martha Graham by Mario Lucarda  sung by American soprano Claron McFadden with Spanish pianist Alberto Rosado  and a collection of ten interludes for shakuhachi and four percussionists, Interludes mediatius, conceived as pieces to be performed between the songs. The latter are performed by Japanese shakuhachi flute player Kakizakai Kaoru, and the Neopercusión quartet, resident group at the CNDM of the Museo Nacional Centro de Arte Reina Sofía, Madrid.

The carefully-crafted published version of Homenaje a Martha Graham consists of two CDs and a 68-page booklet that contains the poem by Mario Lucarda as well as commentaries by musicologist Stefano Russomanno and composer Alexandra Gardner. A code allows the high-fidelity version of the album to be downloaded in surround 5.1 from the record labels web page. The recording was made with a specially designed 3D system in the Sala Mozart at the Zaragoza Auditorium, renowned for its exceptional acoustics.

Alexandra Gardner says: As with Grahams choreography, Humets music displays a sense of gesture focused on contraction and release, thoughtfully balanced from start to finish. Every moment of music is highly focused, and each gesture rendered with sensitivity. The dramatic quality of Humets musical language is intense without being heavy or overbearing; in fact much of his music has a playful spirit. A large-scale work built from interleaved movements of two separate compositions, the piece is a kind of dance in itself. The two compositions flow naturally together, creating a moving meditation full of rich and surprising sonic beauty.