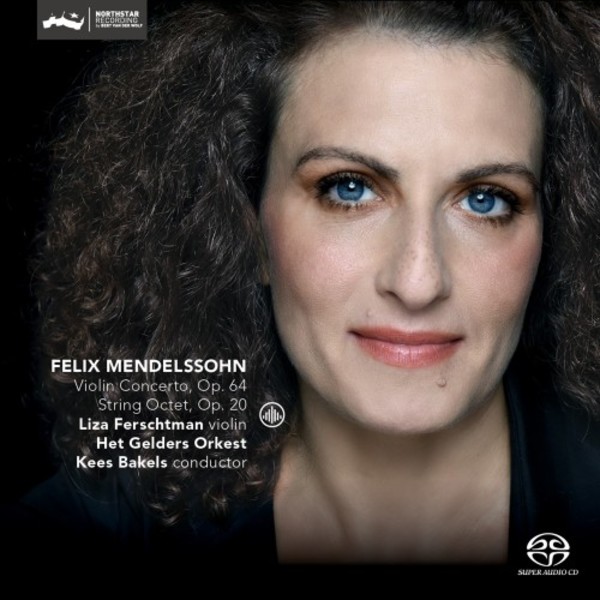 One of the leading Dutch violinists, Liza Ferschtman is especially known for her passionate performances, and here she pairs Mendelssohns famous masterpieces  the Violin Concerto and the Octet for strings  in lively and highly communicative accounts.

With conductor Kees Bakels and the Arnhem Philharmonic Orchestra (Het Gelders Orkest), Ferschtmans chamber-like approach to the Violin Concerto helps in making this performance lighter than usual and able to convey some seldom heard details of the score. When performing it with the orchestra last year she says I really was all of a sudden struck by a distinct feeling that I can only describe as falling in love all over again with this magical piece. Certain details in the score seemed to appear completely new to me and the idea of approaching the work with the same collaborative energy as in chamber music made me experience it completely afresh.

The combination of passion, grand emotions and at the same time lightness and elegance, such characteristic traits for Mendelssohn, fell completely into place. To feel this way about such a familiar piece was revelatory and I knew I wanted to share these discoveries.

An avid chamber musician, Liza Ferschtman has collaborated regularly with artists such as Jonathan Biss, Nobuko Imai, Elisabeth Leonskaja, Christian Poltera, Lars Anders Tomter and Alisa Weilerstein, counting as her duo partners Enrico Pace and Inon Barnatan. For Challenge, she has previously made eight recordings, including a critically acclaimed Beethoven Concerto and Romances, the Dvořák Concerto, and solo works by Bach and Ysaÿe (Strad CD of the Month).

Oh, not another Mendelssohn violin concerto recording, I hear you cry. Well, yes, but wait: this one is worth exploring. These Dutch musicians treat the piece as a chamber work, the cut-down forces of the Het Gelders Orkest giving light and airy support to Liza Ferschtmans carefully judged, singing solo line. It works beautifully, particularly in the dancing central andante. Ferschtman changes gear for the Octet, Op 20, driving the inexhaustible exuberance of this youthful piece with thrilling intensity, her fellow string players responding with similar dash and verve. Recommended.  Stephen Pritchard
The Observer 12 February 2017