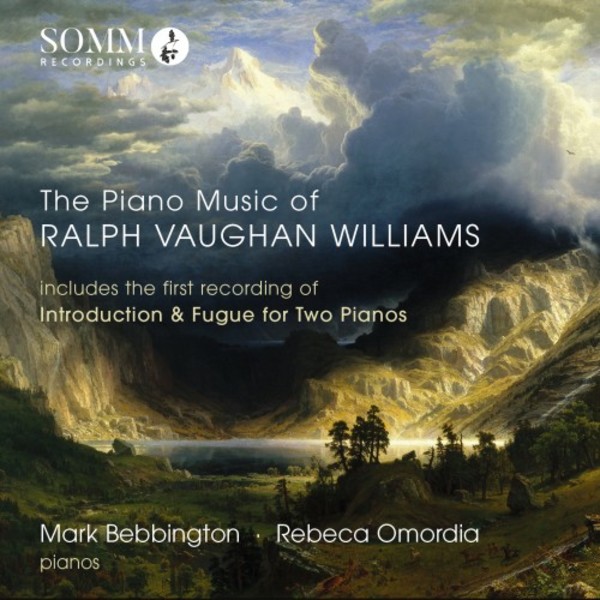 A Little Piano Book
Fantasia on 'Greensleeves' (version for piano duet)
Fantasia on a Theme by Thomas Tallis (arr. for 2 pianos by Maurice Jacobson)
Hymn-Tune Preludes

A Little Piano Book
Fantasia on 'Greensleeves' (version for piano duet)
Fantasia on a Theme by Thomas Tallis (arr. for 2 pianos by Maurice Jacobson)
Hymn-Tune Preludes

After his hop across the Atlantic for his all-Gershwin disc (MusicWeb International Recording of the Month), Mark Bebbington returns to the English fare for which he is best-known, with the Complete Vaughan Williams Piano Music. This SOMM release contains world premiere recordings, notably the Introduction and Fugue. In this work, and in the Fantasia on a Theme of Thomas Tallis, both written for two-pianos, Bebbington is joined by the gifted young Romanian-Nigerian pianist Rebeca Omordia.
The Tallis Fantasia in its original string version is an evergreen English work, repeatedly topping Classic FMs listener surveys of favourite pieces. Of its two-piano version, Bebbington says: In transcribing the Fantasia for two pianos Vaughan Williams has created a work with leaner textures and clearer polyphony.
The premiere recording on this disc is the Introduction and Fugue for two pianos written in 1947, which RVW dedicated to the famous two-piano team Phyllis Sellick and Cyril Smith. Bebbington says: Vaughan Williams wrote the Introduction and Fugue concurrently with the Sixth Symphony  a work which shocked the musical world with its undisguised brutality and modernism, and this piano work belongs to the same musical aesthetic.
The other solo works on the recording include The Suite of Six Short Pieces, better known in its later version for strings (Charterhouse Suite), The Six Little Teaching Pieces are a model of early-stage piano tuition raised to the highest artistic level. And the three miniatures - The Lake In The Mountains, Hymn Tune Prelude and Bach Chorale and Chorale Prelude transcription - inhabit a world of spiritual serenity that, says the pianist, show how deeply Vaughan Williams had absorbed the counterpoint of JS Bach alongside the new music of Ravel and Debussy.

Arrangements of [Vaughan Williamss] Fantasia on a Theme of Thomas Tallis and Fantasia on Greensleeves sound a pleasure to play in the dedicated hands of Mark Bebbington and Rebecca Omordia. The first recording of the two-piano Introduction and Fugue (as its title suggests, a homage to Bach) sounded slightly dogged on first hearing. Yet with repeated listening this substantial work grows more rich and lyrical, in unmistakable RVW vein. Fans as well as completists should try it.  Fiona Maddocks
The Observer 5 February 2017