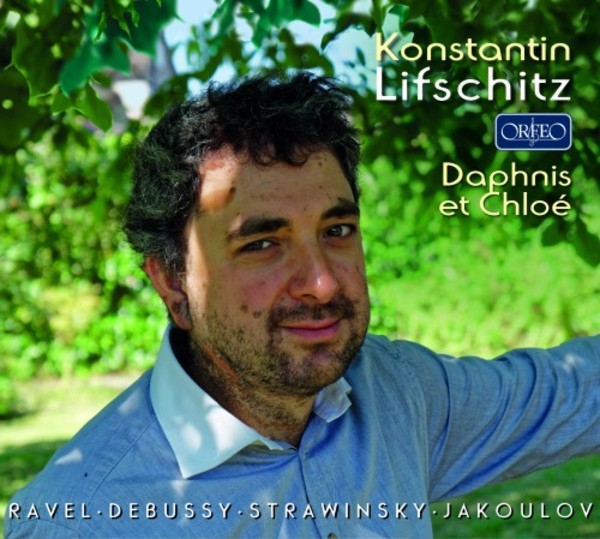 As with his previous CD releases, in choosing his programme Konstantin Lifschitz is concerned not just to find an interesting idea linking the works, but also to bring out the impact of new aural versions. The works by Claude Debussy, Maurice Ravel and Igor Stravinsky, presented together on this CD, are linked by their treatment of material based on myth and legend, and their use of new musical techniques.
Debussys Six Epigraphes antiques are taken from twelve short pieces composed around 1900 as incidental music for 2 flutes, 2 harps and celesta for the Chansons de Bilitis, songs inspired by ancient Greek poems. In 1915 he re-arranged the work, adding refinements to make it more of a virtuoso work for piano solo. Maurice Ravel, who can be viewed as a disciple of Debussy and at the same time was an inspiration to the older composer, produced his longest and most complex orchestral work for the Saisons russes in 1912: some 60 minutes long, this choreographic symphony entitled Daphnis et Chloé was based on an erotic pastoral novel written by the Greek poet Longus in the third century AD.
On this CD, Konstantin Lifschitz here plays his own highly ambitious solo piano version of several pieces from Ravels work. The cascading notes, orgiastically enhanced dances and intoxicating tone paintings (especially one of a sunrise) require the unleashing of a high degree of virtuosity from the performer, such as Ravel had done in his Gaspard de la Nuit. Even taken to such extremes, it remains astounding how accomplished these piano versions sound, considering that the composers Impressionist style was famous for its specific art of orchestration.
Jakov Jakoulovs work Carousel, written specially for Konstantin Lifschitz, provides a further link to the typical beginnings of the Ballets Russes with Petrushka. Born in Moscow, Jakoulov emigrated via Munich to Boston. Carousel combines virtuoso aplomb and instinctive playing with abrupt mood changes and immersion in diverse worlds of expression.