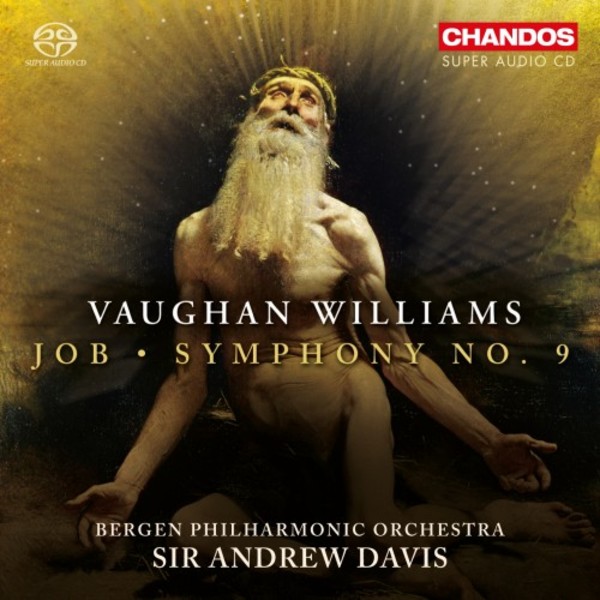 Job: A Masque for Dancing
Symphony no.9 in E minor

Job: A Masque for Dancing
Symphony no.9 in E minor

The projected complete cycle of Vaughan Williamss symphonies started by the late Richard Hickox has left a precious heritage in the discography of the composer. Now, conducting the Bergen Philharmonic Orchestra, that other expert in British repertoire, Sir Andrew Davis, takes on the challenge of completing the series with idiomatic interpretations of two masterpieces: the final Symphony (No.9) and the ballet Job.

The score of Job places an emphasis on tableau-like scenes, dances, and mime, linking it to a tradition of English ballet with dances from the seventeenth century, including the saraband, pavane, and galliard. In this masterly score, Vaughan Williams captures the conflict between good and evil, between the spiritual and the material. Job shows a strength, beauty, nobility, and visionary power which unite the many different facets of Vaughan Williamss musical style. The poignant and musically enigmatic Symphony No.9 marks the end of Ralphs life and [is] a turning point. It is leading out into another place. It is extraordinary, as the composers wife stated after one of the early performances.

The subtle direction of Sir Andrew Davis combined with the pure sound quality of this SACD does full justice to Hickoxs great enterprise and promises a powerful conclusion of this already acclaimed recorded cycle.

No other work by Vaughan Williams so powerfully combines the heavenly, the earthly and the infernal into such a cogent and moving musical whole as his Masque for Dancing, Job (1927-30). Suggested to him by Geoffrey Keynes and RVWs cousin Gwen Raverat, it was inspired by William Blakes 1826 Illustrations of the Book of Job, and combines the intense sobriety and expressivity of the biblical narrative and the visionary quality of Blakes engravings. The work was premiered in concert form at the Norwich Festival in October 1930, before being staged in Londons Cambridge Theatre in 1931 in a reduced orchestration by Constant Lambert. But it is the composers full orchestral version that has proved enduringly popular, and since its first recording by Adrian Boult and the BBC Symphony Orchestra in 1946 several successful accounts have been captured on disc.

This new recording from Andrew Davis and the Bergen Philharmonic Orchestra on Chandos is a splendid addition to the works discography. It may be less overtly characterful than the widely recommended David Lloyd-Jones recording on Naxos (where the English Northern Philharmonia bring out the Stravinskian flavours of the Pastoral Dance in Scene I), but the quality of playing and recording on the Chandos disc is consistently higher. Some details (for example, the harp glissandi in the Minuet of the Sons of Job and Their Wives) are less prominent, more integrated into the prevailing sumptuous sound-picture, but the sheer beauty of the more pastoral, reflective music is undeniably impressive. The oleaginous saxophone sighs in the Dance of Jobs Comforters (Scene VI) are particularly successful here, while the great organ entry in the Vision of Satan is staggering (the Rieger organ of Bergen Cathedral is a mighty instrument!). Perhaps the transition from Elihus Dance to the Pavane of the Sons of the Morning could be more magical, but the Pavane itself is gloriously noble, and the closing pages have a heartfelt, bittersweet gentleness that is unmatched. In Daviss reading, the fine details of the narrative of Jobs tribulations are less important than the overarching line of the work, and on these terms the performance is hugely powerful. And the top-drawer quality of the Bergen playing (as well as the recording, engineered by Ralph Couzens) places this account high up in a very competitive field.

As with Daviss earlier BBCSO recording of Job on Teldec (now Warner), the generous coupling is Vaughan Williamss final symphony, the enigmatic Ninth (1956-57). Initially inspired by Thomas Hardys masterpiece, Tess of the dUrbervilles, but with a programme that (in the composers words) got lost along the way, this is a work of uneasy lyricism that vies with darker, more incisive elements, before achieving a transcendent, otherworldly close. Once again the Bergen players bring an opulent quality to the music making, with plenty of bloom to the strings, properly forward saxophones (with important parts to play in the third and fourth movements), and vivid percussion in the middle two movements. The tolling of bells at the close of the Andante is a particularly affecting moment, and the symphonys ending is wonderfully luminous and superbly balanced. More radiant, less earthbound than Daviss BBCSO account, this is another exceptionally strong addition to the catalogue, making this a highly attractive disc. Stephen Connocks booklet notes, particularly for Job, are exemplary, making it easy to follow the works unfolding scenario.

Job receives a performance of striking composure, lustre and palpable dedication. Not only do the Bergen Philharmonic respond with notable poise and eagerness (solo contributions are of the highest quality throughout), Davis conducts with unobtrusive authority as well as a sure hand on the structural tiller, uncovering a wealth of telling harmonic and textural detail along the way... The spectacularly vivid and wide-ranging Chandos engineering handles everything with aplomb, not least that hair-raising organ- and timpani-writing in scene 6... Theres heaps to praise, too, in Daviss scrupulously observant and nobly unforced conception of the Ninth Symphony ... that, to my mind, deserves a place at the top table alongside the 1969 Boult, Handley and Haitink.  Andrew Achenbach
Gramophone March 2017

As before, Daviss path through Job is totally lucid, and his handling of the great climaxes is impressive, with the organ (recorded in Bergen Cathedral) weighing in emphatically for the appearance of Satan in the sixth scene. ... as Davis demonstrates, the [Ninth Symphony] is not just an experiment in exotic sonorities, but a last tough, defiant statement from a composer who never stopped exploring new musical territory, It makes a telling, fierce contrast to the humane acceptance thats embodied in Job.  Andrew Clements
The Guardian 1 February 2017

Theres a naturalness of manner here [in Job] that nonchalantly underlines the story-telling element of this Elizabethan-inspired masque for dancing... The same top-flight level of playing and conducting graces the Ninth Symphony, premiered in the year of its composers death, and still a rarity in the concert hall. ... The cumulative effect is of immense and implacable power, astonishing from a composer in his mid-eighties. In both works the recorded sound is gorgeously warm, detailed, and naturally balanced.  Malcolm Hayes (Recording of the Month)
BBC Music Magazine April 2017