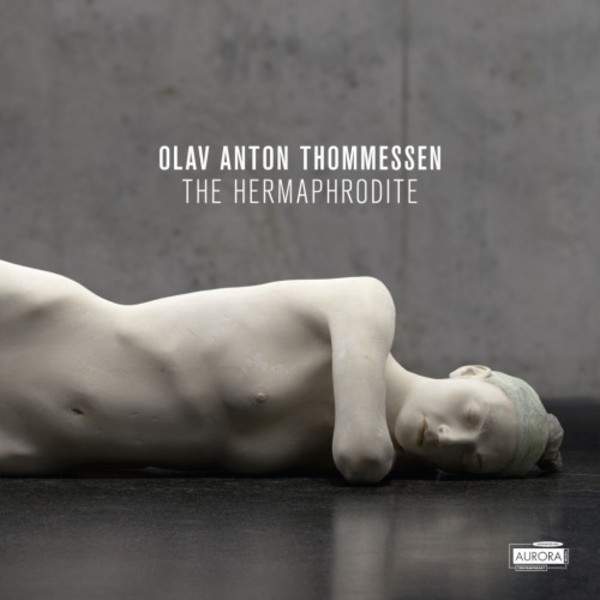 The Hermaphrodite: ballet-opera in 2 acts, op.18

The Hermaphrodite: ballet-opera in 2 acts, op.18

The chamber opera The Hermaphrodite was composed by Olav Anton Thommessen between 1970-1980 and consists of seven independent chamber works which, when performed in succession, comprise a compelling scenic whole.

In a sense the opera is an allegory on the awakening sexuality in man and the meeting between its masculine and feminine aspects. Using texts by DH Lawrence and Isidore Ducasse and from The Secret Gospel of Mark, it was conceived as as a ballet-opera and requires six soloists, two actors, dancers and a chamber ensemble. Now, 40 years after its part-premiere in 1976, the complete opera is finally released on CD.

The Oslo Sinfonietta performs The Hermaphrodite under its chief conductor and artistic leader Christian Eggen. Consisting of leading freelance musicians and members from some of Norway´s most prominent orchestras, the ensemble has the quality and flexibility demanded by a modern repertoire. They are joined by a dream team of soloists: Eir Inderhaug (recitation, soprano), Isa Katharina Gericke (soprano), Anna Elisabeth Einarsson (mezzo-soprano), Nils Harald Sodal (recitation, tenor), Espen Fegran (baritone) and Ketil Hugaas (bass).

As a central figure in Norwegian musical life, composer Olav Anton Thommessen (born 1946) has throughout his career made an impressive contribution to the acknowledgment of newer forms of music, either through his occasional radical musical language, his capabilities to discover new views on the musical process through his tuition, or as a debater on the position of music and art in society as a whole.

Thommessens ballet-opera The Hermaphrodite dates from the 1970s and uses texts by DH Lawrence, Isidore Ducasse and early Christian gnostics. It deals in matters of love, lust and sexuality and all feels wonderfully of its time ... As a period piece its great fun, and this performance by the Oslo Sinfonietta under Christian Eggen is impressive: committed and energetic, with ultra-focused playing, vivid drama in the pacing and spacing (the recording sounds 3D), elastic singing and some virtuosic heavy breathing from soprano Eir Inderhaug and the rest of the cast.  Kate Molleson
The Guardian 2 February 2017