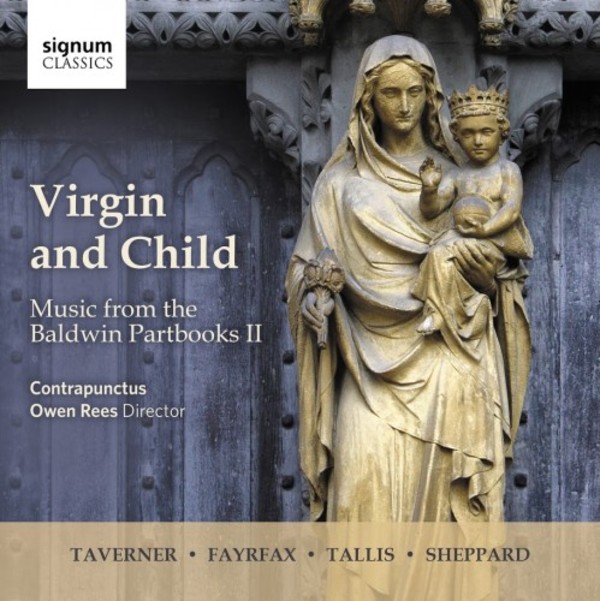 Early music consort Contrapunctus return to disc on Signum for the second release in their series centred on music of the Baldwin Partbooks. John Baldwin was a member of the choir of St Georges Chapel, Windsor, and his transcriptions during the 1570s and '80s create one of the greatest surviving collections of Marian polyphony, composed during the reigns of Henry VIII and Mary Tudor. This volume explores texts celebrating Mary as mother of God, and on the Virgin and her Child.

Contrapunctus, led by Owen Rees, couple powerful interpretations with pioneering scholarship, particularly in music of the 16th and 17th centuries. Currently Vocal Consort in Residence at Oxford University, the ensembles first two recordings, 'Libera nos' and 'In the Midst of Life', were both shortlisted for the Gramophone Early Music Award.

Contrapunctus are special...These are understated performances whose moment-to-moment drama is less striking than the long, aching arcs they achieve over five or six minutes - director Owen Rees shows his experience here, making a case for a conductor in a climate in which musical democracy is increasingly king. - Gramophone Magazine, Editors Choice, May 2015

Contrapunctus really knows what to do with these pieces and from the very first item...the tuning is superb and the ensemble rock solid. Moreover, Owen Rees's interpretations are revelatory and even visionary... The next volume is keenly awaited. - BBC Music Magazine, Choral & Song Choice, August 2015 *****

The first track here is one of the most astonishing, sustained 18 minutes of polyphony you will ever hear: Contrapunctus realise the Gothic spans and arching phrases of Talliss lavish Gaude gloriosa Dei mater with wonderful clarity and poise. ... With crystal-clear sounds from the high sopranos, the repeated invocations of Robert Fayrfaxs Ave Dei patris filia have a hypnotic quality, while the two shorter Robert White motets in honour of the Virgin Mary are very moving.  Nicholas Kenyon
The Observer 12 February 2017