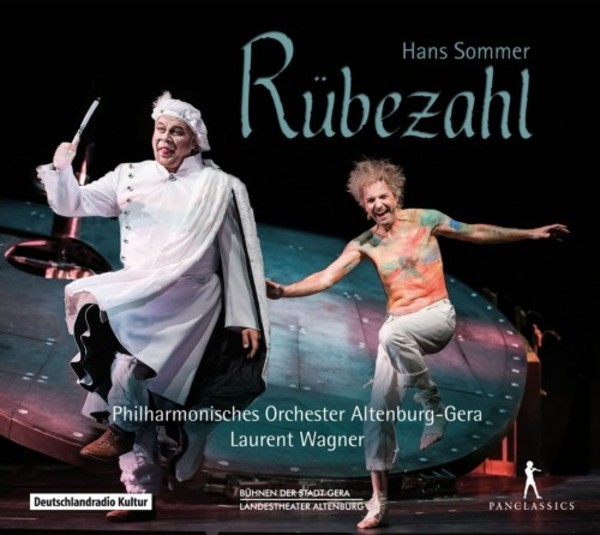 The almost completely forgotten Rübezahl und der Sackpfeifer von Neisse [Rübezahl and the bagpiper of Neisse] was first performed in 1904 in Brunswick, and in the following year in Berlin and Weimar, under the baton of Richard Strauss, with whom Hans Sommer formed a close friendship. Its special feature is the post-Romantic melodic writing, admittedly with certain foundations in Wagners music.

It was performed live at Bühnen der Stadt Gera and caught by the microphones of Deutschlandradio Kultur on 31 March2 April 2016.

Love for a woman or loyalty to the people who chose him as their leader in the struggle for freedom against the tyrant - this is the dilemma in which the young painter Wido finds himself. Wido's lover, Gertrude, was the daughter of Buko, who cruelly oppressed the population of the city of Neisse, at the foot of the Giant Mountains, and exploited them. In his despair, Wido summons the legendary Berggeist [mountain spirit] Rübezahl, who also appears promptly. Soon Rübezahl assumes the shape of a bagpipe whistle; as a simple musician, and yet brings many things together.

Rübezahl, a legendary figure from the Riesengebirge, has fascinated since the Renaissance. Sometimes he takes people off the right path, sometimes he appears as their protector. Often he takes the form of others, drives his trickery, and intervenes in destinies. The opera Rübezahl and the bagpiper of Neisse is also about the power of love, the power of music and the civilising meaning of art.

Hans Sommer (18371922, Brunswick) saw music evolve from Schumann to Schoenberg, Wagner to Webern. A scientist and mathematician by profession, he turned to music full-time only in his forties. In 1875, Sommer met Richard and Cosima Wagner for the first time and founded a Wagner Association in Brunswick. One year later he visited the first Bayreuth Festival as their guest. In the years that followed, he was part of the group of artists based at Wahnfried, although he tried to avoid being a blind follower, as Sommer himself wrote in his memoirs.

From 1882 on, he published over one hundred songs and ballads in quick succession. Following the success of his opera Loreley, premièred in 1891, and which Richard Strauss presented in Weimar in 1892, he became an established opera composer.