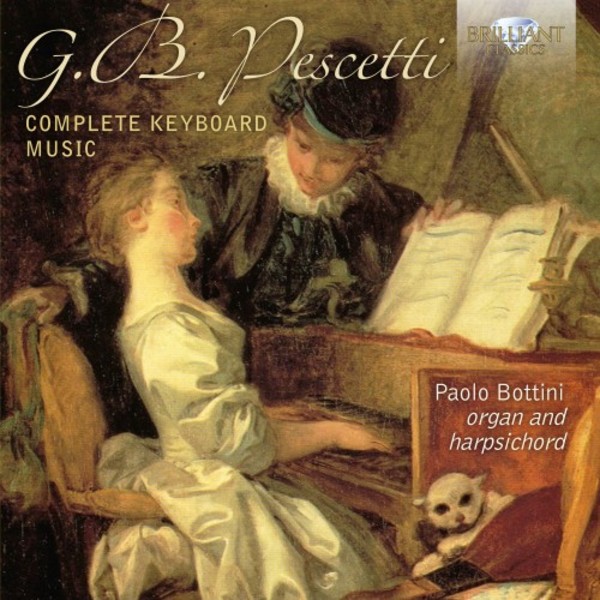 Giovanni Battista Pescetti was another product of the astonishing Venetian industry in fine musicians during the 17th and 18th centuries. Having studied with Antonio Lotti, organist at St Marks and author of the famous Crucifixus, he struck up a friendship with a fellow pupil, Baldassare Galuppi, whose harpsichord music has already featured on Brilliant Classics (BC95253). The two men wrote operas together in their 20s, before Pescetti impressed London audiences as a harpsichordist.

In 1736 he became director of Opera of the Nobility, which was the rival company to the one run by Handel in the Haymarket. The company collapsed  who could rival Handel?  but Pescetti remained in London and probably only returned to Venice in 1747, where he finally attained the long-coveted position of organist at St Marks in 1762, four years before his death.

Thus the bicentenary of Pescettis death was marked in 2016, though to no great fanfare: his name remains in the shadows of more illustrious Venetian contemporaries. Hopefully this adventurous release will help to redress the balance. There are two extant collections of harpsichord music, and a set of four organ sonatas. The six 1739 sonatas are composed in a transitional idiom between the Baroque and galant styles. The second set of sonatas, written around 15 years later, fully inhabit the galant idiom, with much less counterpoint and more abundant use of melody and arching harmonic expression.

Giovanni Battista Pescettis remarkably expressive use of melody validates Paolo Bottinis decision to perform the harpsichord sonatas on the organ. Even the passages that would seem to be singularly well suited to the harpsichord gain from the variety and refinement of sound of the two Venetian instruments Bottini has chosen to play, both of them dating back to Pescettis time. Moreover, there are evident benefits in the natural acoustics of the respective churches, especially those of San Giorgio Maggiore, which are particularly generous. Likewise at San Cassiano, the presence of two manuals allows for some magnificent echo effects in the passages containing short repeated segments. At San Giorgio, a similar outcome is achieved by simply drawing the stops, which is clearly audible on various occasions in this recording, as it is in the pieces played on the organ at San Cassiano.