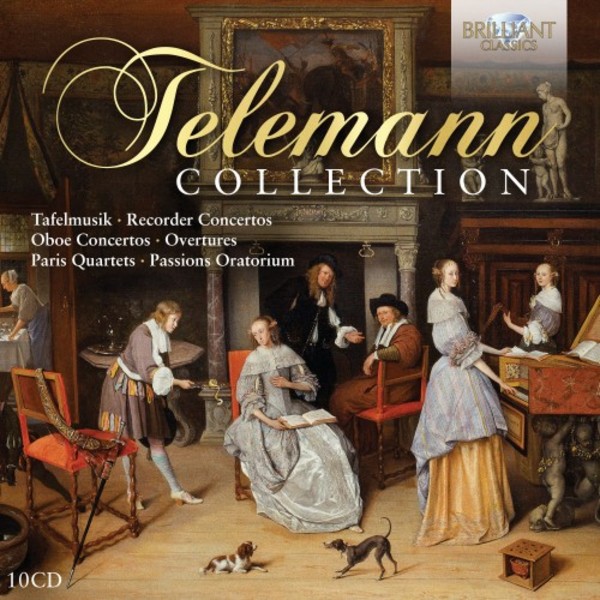 Commemorating the 250th anniversary of the death of Georg Philipp Telemann, this release encapsulates a snapshot of the composer's varied and wide‐ranging works. Deservedly celebrated as one of the greatest Baroque composers, Telemann mastered a variety of genres, from solo concertos to large‐scale oratorios.

Born in Magdeburg, Germany, in 1681 (four years before J.S. Bach), Telemann's musical talents were recognised early on, when he studied singing and composition with the cantor Benedikt Christiani. His parents were unhappy about the possibility of a future musical career, and tried to pair him with a teacher who would give him a rounder education; however, when Caspar Calvoer recognised his musical talents, he also encouraged Telemann to develop his abilities. Although he entered Leipzig University intending to study Law, Telemann soon abandoned this for his musical career. In 1705 he became Kapellmeister to the Count of Promnitz, who frequently travelled through Italy and France; Telemann soon immersed himself in the French style, and, while working for the count, was also exposed to Polish and Moravian folk music.

Telemann then became Konzertmeister for the Duke of Eisenach Johann Wilhelm. It was in Eisenach that he began to focus particularly on instrumental music, still in his preferred French style. He also met Bach here for the first time, later becoming godfather to C.P.E. Bach. His first marriage ended in tragedy, when his wife died in childbirth a year after their wedding; his second, to Maria Catharina Textor, was more successful. Together they had nine children, though none would go on to become a musician.

In 1721, Telemann became cantor and musical director of the five main churches of Hamburg, sparking the most creative period of his career. He was obliged to produce two cantatas for every Sunday, and a new Passion for Lent. Despite a heavy load of teaching responsibilities, Telemann also found time for public concerts, and supplemented his income further by printing his works (despite protests from the city's printer). Famously, he applied for and then turned down the position of Thomaskantor in Leipzig, forcing Hamburg officials to increase his salary, solidifying his position in the city. He became part of the intellectual fabric of that city, vacating it only for a sojourn to Paris in 173738, where he wrote the Paris Quartets.

In the years leading up to his death in 1767, Telemann published little, but remained alert to the musical trends of the day, corresponding regularly with younger composers such as C.P.E. Bach. He was highly popular still at the time of his death, but fell out of the favour during the 19th century. Only towards the second half of the 20th century was the composer's reputation fully restored, culminating in a comprehensive thematic catalogue that documented over 3000 works. Brilliant Classics has already released an extensive Telemann Edition (BC95150), comprising 50CDs' worth of music, which is an excellent addition for any lover of Baroque music. However, those just looking to dip their toes into the water for the first time will find much to treasure on this release, a fine selection of some of the most exquisite examples of Telemann's works.