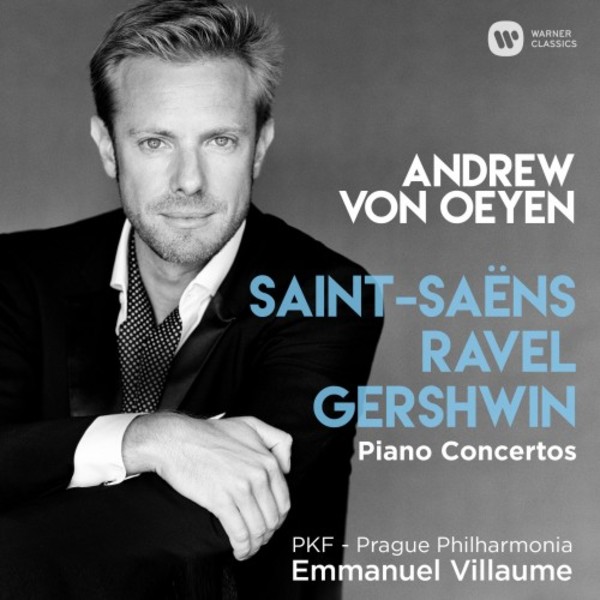 Perhaps it is no coincidence that my debut album for Warner Classics presents a Franco-American theme, says pianist Andrew von Oeyen of this programme of works by Saint-Saëns, Ravel and Gershwin. An American (of German and Dutch origin) who trained at New Yorks Juilliard School, he lives between Los Angeles and Paris. He is partnered on the album by the PFK Prague Philharmonia under its Music Director and Chief Conductor Emmanuel Villaume  a Frenchman who is very much at home in the USA, as Music Director of the Dallas Opera and as a frequent guest conductor with Americas leading opera companies and orchestras.

I am grateful for the opportunity to live between two continents, continues Andrew von Oeyen, and extremely fortunate that my profession allows for this situation. I often say that if someone were to put a gun to my head and make me choose between Europe and America, I would probably get shot!  As a musician of the 21st century, Id like to think that my passport has little to do with the kind of artist I am; certainly, it doesnt determine the repertoire I choose to play.

The works he has chosen for this album are Saint-Saënss Piano Concerto No.2 in G minor, dating from 1868, Ravels Piano Concerto in G, written between 1929 and 1931, and Gershwins Second Rhapsody, composed in 1931, seven years after the better-known Rhapsody in Blue.

Praise for von Oeyens playing in the US has come from such media as the Los Angeles Times, which spoke of his indisputable gifts [and] an extravagantly thorough and effortless technique, concluding that von Oeyen seems incapable of misarticulating a musical sentence. In France, meanwhile, Le Monde de la Musique has said that: Andrew von Oeyen has a technique remarkable in its fluidity, a precise and balanced way of playing, but most of all a disarming elegance and charisma that allows him to communicate with the greatest of ease.

When it came to putting this album together, Ravel was, as von Oeyen explains, the unifying thread in the programme  he knew both Saint-Saëns and Gershwin. Saint-Saëns died in 1921 at the age of 86, just at the time Gershwin was achieving huge success. Ravel cited the older composers five piano concertos, works full of colour and elegance, as an influence on his G major concerto, but todays listeners will inevitably be struck by its fusion of characteristic Gallic refinement (epitomised in a central movement of delicate poetry and discreet melancholy) with jazzy bluesiness and angularity. No music from outside the European Continent would influence Ravel more than American jazz, says von Oeyen. In 1928 he even wrote I like jazz far more than grand opera. His use of jazz in his Concerto in G is probably the most discussed and obvious aspect of the work. But what most impresses me is that the piece doesnt reflect a classically trained French musician trying to write in the style, thereby diluting, simplifying or mimicking jazzs core features  Rather it reflects a creator who makes the genre his own, masterfully employing its harmonic and rhythmic idioms and without resorting to cliché.

No French composer was more influenced by the music of Gershwin than Ravel, and probably no American composer was more influenced by the music of Ravel than Gershwin, continues von Oeyen. The two composers met in Paris in 1926 when Gershwin was on the trip that led to the composition of An American in Paris. In 1928, when Ravel visited the US, he saw Gershwins musical Funny Face on Broadway, the two composers visited a jazz club in Harlem and Gershwin played Ravel his Rhapsody in Blue. Andrew von Oeyen recounts the famous anecdote  perhaps apocryphal  of Gershwins request to study with Ravel. The Frenchman replied: Why would you want to be a second-rate Ravel when you are already a first-rate Gershwin? Plus, you make more money than me, so I should take lessons from you!

Ravels Concerto in G and Second Rhapsody received their premieres within weeks of each other. While Ravels concerto has become one of his best-loved works, Gershwins Second Rhapsody has not achieved the phenomenal popularity of Rhapsody in Blue. Andrew von Oeyen finds that hard to explain: It bears all the qualities of Gershwins genius and, in my estimation, at times even surpasses its prototype. Certainly, it deserves to be played more often.

A short piece that is an undoubted favourite completes Andrew von Oeyens album. It is an arrangement for piano of the soaring Méditation from the opera Thaïs by Massenet. Here too there is a Franco-American connection. The title role of the opera, first seen in 1894, was written for the charismatic soprano Sybil Sanderson, who was born in California, but enjoyed her greatest successes in Paris.