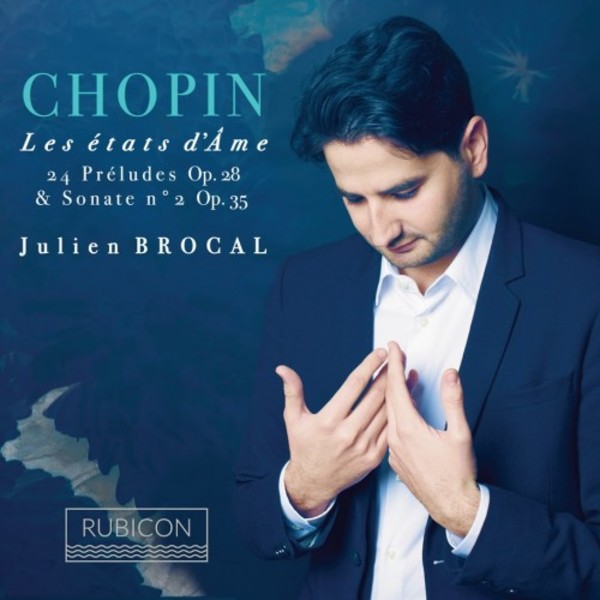 Julien Brocal was born in Arles, France in 1987 and began piano lessons at the age of 5, and by 7 was performing on stage. In 2013 he was tutored by Maria João Pires at Cité de la Musique in Paris, and later she invited him to develop his projects and studies at the Queen Elisabeth Musical Chapel, and participate in the creation of the Partitura Project. Since then they have performed together at many of the worlds leading festivals and venues. This disc is Juliens debut recording.

Chopin composed both his Preludes, op.28, and the Second Piano Sonata, op.35, in the years 183839, which also saw the start of his relationship with the writer George Sand and their infamous winter sojourn in Majorca. A time where the mood changed from happiness to great tension in their relationship, his health worsened, doctors attended him: "One told me I was going to die, the next that I was dying, and the last that I was already dead"; and the weather changed from warm sun to cold, relentless rain. Many changing moods are reflected in the Preludes.

"A sense of poetry, of alternate spontaneity and restraint, a profound understanding of structure and a true awareness of sound these are some of the rare qualities he demonstrates" - Maria-João Pires

A protege of Maria João Pires, Julien Brocal has a lot to live up to, and this disc  the first both for him and the new label Rubicon  does so beautifully. Brocal offers a thoughtful traversal of Chopins Op 28 Preludes, knitting together these 24 miniatures  some lasting barely half a minute  to form a coherent whole. His playing is quietly riveting, drawing the attention without grand gestures, and so focused that the melodies in ostensibly busy little pieces like No 3 and No 8 hold their stillness while the decorative gossamer accompaniment spirals around them.  Erica Jeal
The Guardian 12 January 2017

This double debut  Julien Brocals first CD and the launch of a new label devoted mainly to young artists  proves that even in a very crowded field there are new things to say. Even more to the point is the fact that this young French pianist says them with complete naturalness, for there is nothing contrived or attention-seeking about his approach to such well-known repertoire.  John Allison (Instrumental Choice)