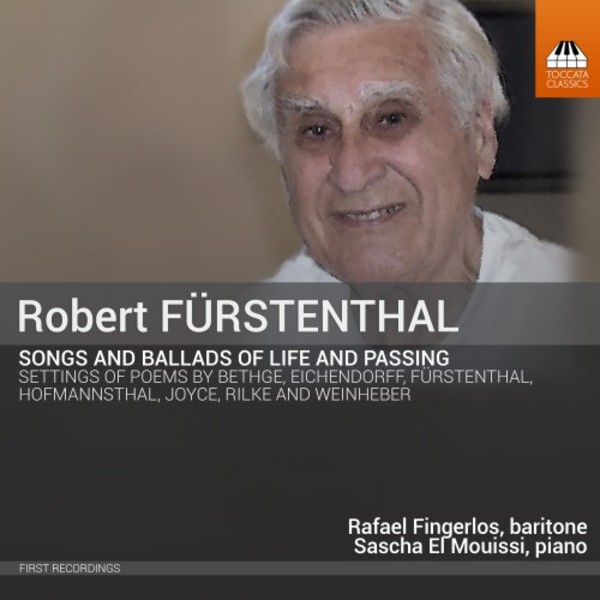 Robert Furstenthal - Songs and Ballads of Love and Passing

Robert Fürstenthals story is an extraordinary one, a kind of fairy-tale of the twentieth century. Born in 1920, when Germany invaded he took the path of many Viennese Jews and fled to the United States, where he made his living as an accountant. The fact that he had written a few songs in his youth was soon forgotten, but when after 35 years he rediscovered the woman who had been his first love, it rekindled not only that flame but also his urge to compose.

Hundreds of songs  achingly lovely songs, laden with an autumnal sense of loss  have flowed from his pen from then on, preserving the spirit of fin-de-siècle Vienna under the Californian sun. He died in November 2016, aged 96, with the satisfaction of having heard his songs in these wonderful performances  a last-minute vindication by two young musicians who can carry his music into the future.

The baritone Rafael Fingerlos, born in Salzburg, received a masters degree in voice with honours in November 2013 from the Konservatorium Wien Privatuniversität, where he studied with Uta Schwabe. He has deepened his artistic education in masterclasses with Angelika Kirchschlager and Helmut Deutsch. Recital and concert work take a central place in his artistic activity. Rafael has recorded Bach cantatas with Das Neue Orchester conducted by Christoph Spering, to be released on Harmonia Mundi. This recital of songs by Robert Fürstenthal is his first collaboration with Toccata Classics.

Born in Frankfurt-am-Main, the pianist Sascha El Mouissi studied piano at the Mainz School of Music and piano-vocal accompaniment at the University of Music and Preforming Arts Vienna with Charles Spencer. He has a busy international concert schedule, with invitations to numerous festivals, among them the Festwochen in Vienna and the Istanbul Music Festival. His concert tours have taken him to Austria, England, France, Italy, Morocco, Switzerland and Turkey. His recitals have featured in the London Arts Festival in St Martin in the Fields, at the Beethoven Society of Europe and the Salzburger Schlosskonzerte and elsewhere.