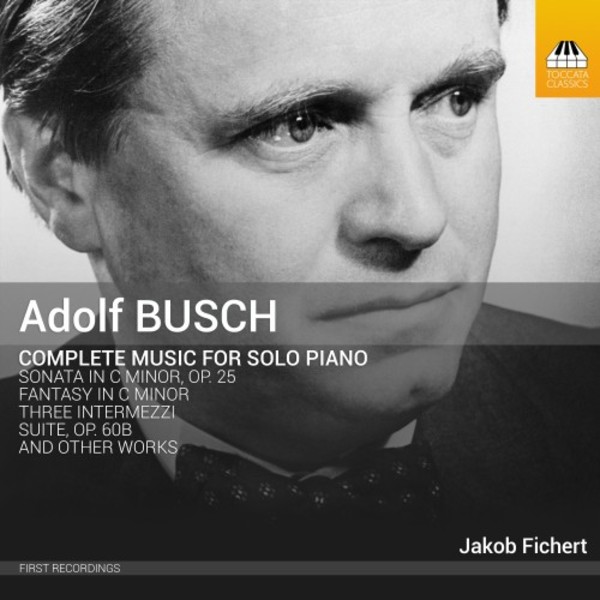 Adolf Busch (18911952) is generally remembered as one of the great violinists and founder-leader of the peerless Busch Quartet. He was also, as one of the very few German musicians to take a stand against Hitler, a figure of moral authority who was forced into US exile, where he founded the Marlboro Festival.
Busch was also an important composer, as an increasing number of recordings is starting to show, working in a tradition coloured by his friend and mentor Max Reger. His output for solo piano  recorded here for the first time  shows off his natural qualities as contrapuntist and melodist, in music that is both immediately attractive and intellectually rewarding. The major work here is his C minor Sonata, written in 1922 for his son-in-law Rudolf Serkin, who was its first champion.
Jakob Fichert is Senior Lecturer in Piano and Piano Accompaniment at the Leeds College of Music. He has played solo and chamber-music recitals in the UK, Germany, Hungary, Italy, Lithuania and other European countries, in such venues such as the Queen Elizabeth Hall, Wigmore Hall, Kings Place, Cadogan Hall, Fairfield Halls, Colston Hall in Bristol and the Recital Hall of the Concertgebouw in Amsterdam. He studied at the Musikhochschule Karlsruhe before undertaking a postgraduate course at the Royal College of Music in London, and after a Masters in Chamber Music stayed on as a Junior Fellow at the RCM until 2003. A valued teacher, he has given numerous master-classes for specialist music schools and other musical organisations. He also works as an examiner and consultant for the Associated Board of Royal Schools of Music and holds the positions of Visiting Music Tutor at Goldsmiths University, also in London. He has recorded music by Hans Gál and André Tchaikovsky for Toccata Classics and Reger for Naxos.