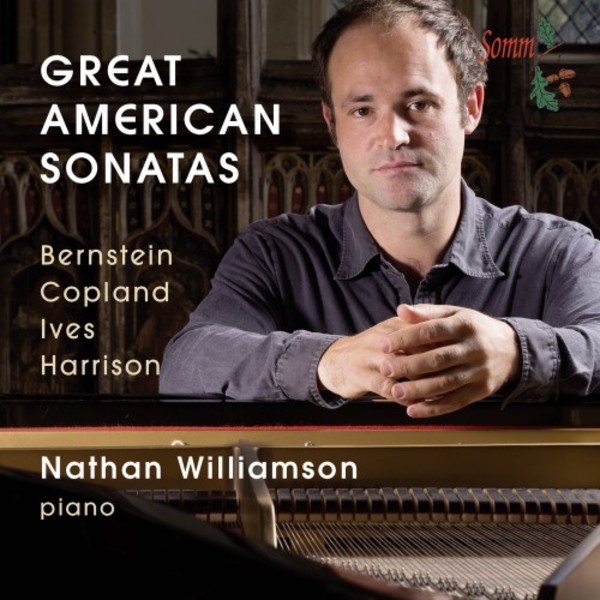 An exciting new release of American Piano Sonatas from SOMM this month, to remind us of 20th-century Americas achievements in music as in so much else. SOMMs new collaboration with pianist Nathan Williamson who has been steeped in American music since his years as a student of piano and composition at Yale has produced an exhilarating disc brimming with dynamism and energy.

The disc includes sonatas by four very different American composers writing under very different circumstances: Leonard Bernstein, a charismatic, ambitious all-round musician in his student years; Aaron Copland, an established master at the height of his powers; Lou Harrison, an inveterate experimentalist setting himself a new problem; and Charles Ives, a dogged individualist insisting on his own way of doing things. In each case, the composer chose not to fit his music into conventional forms, but to rethink the whole idea of the sonata. America is after all the land of the clean sheet, the fresh start  of making things fresh, exciting and new.

Nathan, who leads a diverse and varied career as pianist, composer and artistic director, studied at the Guildhall School of Music and Drama with Joan Havill and Malcolm Singer, at Oxford University with Robert Saxton, and at Yale with Martin Bresnick and Joan Panetti and American composer Ezra Laderman Dean of the Yale School of Music and President of American Academy of Arts and Letters, who died last year at the age of 90. Nathan has dedicated this recording to Laderman as a tribute to a great teacher whose far-reaching influence has inspired him to study the work of American composers in great depth.

There are few recordings of these works that equal this. The artists technique and pianistic command allow him an ideal musical freedom. The effect is of intense commitment and an ultimate sense of poetry. - Bryce Morrison of Williamsons debut solo disc Brahms & Schubert: Late Piano Works, released in 2013.

Williamsons approach is visionary and romantic. But in this he is never crude, mannered or artificial. Rather one senses he has looked deep inside these works and explored their complex interior with thoughtful contemplation as well as love and empathy. - Donald Sturrock

Nathan Williamson brings together works by four American composers, mostly from the 1930s. Coplands Piano Sonata (1939-41) is striking and desolate, especially the heavily chordal finale which sinks into quiet, mysterious retreat. Bernsteins ... has a free structure but a dense texture, full of toccata and syncopation. Lou Harrisons Sonata No 3 (1938) exemplifies his love of process and rules, though is hugely more rewarding than that may sound. Ivess short Three-Page Sonata (1905), bold, dissonant and also schematic in its use of the B-A-C-H motif, ends with jubilant marches: iconic Ives that looks back to an American past as well as forwards. All fascinating.  Fiona Maddocks
The Observer 19 February 2017