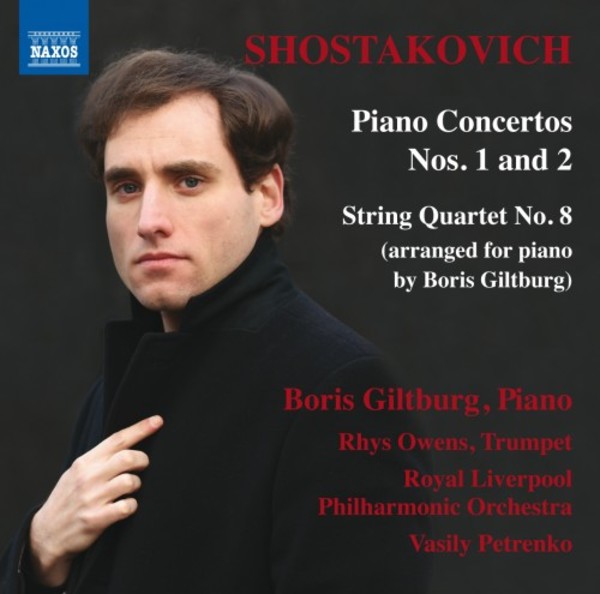 Shostakovichs two Piano Concertos span a period of almost thirty years. The youthful First Piano Concerto is a masterful example of eclecticism, its inscrutable humour and seriousness allied to virtuoso writing enhanced by the rôle for solo trumpet. Written as a birthday present for his son Maxim, the Second Piano Concerto is light-spirited with a hauntingly beautiful slow movement. With the permission of the composers family, Boris Giltburg has arranged the exceptionally dark, deeply personal and powerful String Quartet No.8, thereby establishing a major Shostakovich solo piano composition.

Boris Giltburg took first prize at the 2013 Queen Elisabeth Competition, having won second prize at the Rubinstein in 2011 and top prize at Santander back in 2002, and subsequently appearing across the globe. Notable débuts have included a South American tour in 2002 (and every season since), with the Israel Philharmonic in 2005, the Indianapolis Symphony in 2007, a tour of China in 2007, and at the BBC Proms in London in 2010. He has appeared with Marin Alsop, Martyn Brabbins, Edo de Waart, Christoph von Dohnányi, Philippe Entremont, Vladimir Fedoseyev, Neeme Järvi, Kirill Karabits, Emmanuel Krivine, Hannu Lintu, Vasily Petrenko, Jukka-Pekka Saraste, Tugan Sokhiev and Yan Pascal Tortelier, among others. In 2014 he began a long-term recording plan with Naxos.

Pianist Boris Giltburg is a man on a mission: to bring some of Shostakovichs deepest and most emotionally powerful music to the solo piano. And to that end he has arranged the composers Eighth Quartet (with the Shostakovich estates blessing) for the piano. The good news is that it works astonishingly well: yes, one might occasionally miss the sustaining power of a string ensemble in some of the slower music, but weigh against this the sheer percussive brilliance of the piano, particularly in the faster, more demonic passages, not to mention the sheer depth of tone and single-minded focus that Giltburg brings to the music. Only die-hard purists could fail to be impressed; anyone with a love of this music and an open mind ought to hear it as a matter of urgency (and urgency is one of the many qualities Giltburg consistently brings to the scores throughout this new Naxos disc). The Waltz movement from the Second Quartet works well too  a handsome bonus, whose changing moods Glitburg vividly conveys in a genre that is more obviously adaptable to the keyboard medium.

And then there are dazzling new performances of Shostakovichs two piano concertos. The Second  long considered a Cinderella among the composers works in the genre  is treated with an underlying seriousness seriousness of purpose that belies its reputation as a mere pièce doccasion. Few performances of the central Andante can have been so meltingly heart-moving or openly honest, Giltburg matched by superlative playing from the strings of the Royal Liverpool Philharmonic under the sympathetic direction of Vasily Petrenko. The outer movements have plenty of sparkle, the orchestral winds again matching Giltburg in pertness and bite. If anyone can win you over to this underrated piece, its this team, in an important addition to the discography.

As for the more popular First Piano Concerto, this is a tremendously impressive performance, unerringly catching the composers many faces: youthfully playful, sharply sardonic, deadly earnest. The RLPOs principal trumpet is a worthy partner in a work that started life as a double concerto, clearly on his mettle in the outer movements, and utterly haunting in the Lento slow movement. As for Giltburg himself, hes on stunning form: not just secure of tone but kaleidoscopically colourful and emotionally wide-ranging, and above all with a superb clarity and sureness of touch. In the helter-skelter finale he goes for clarity rather than sheer mania, and gains enormously in terms of musical power as a result. Nothing seems to elude him, either expressively or technically. This is the same sort of musical prowess that impressed so many in his recent Naxos disc of Rachmaninovs Études-tableaux, successfully transferred to the very different medium of Shostakovich. It crowns a triumphant release.

Extensive, detailed notes by Giltburg himself and superb recordings all add up to an unmissable and unusually fascinating bargain.

Giltburg has all the agility, power and expressive intensity Shostakovichs piano concertos demand, plus the temperament to negotiate their mercurial shifts of mood. Every phrase is imaginatively coloured or nuanced, and never out of gimmicky point making, always because he has something worth saying. And he has found like-minded partners in the RLPO and Petrenko, who not only follow and support him superbly but also respond and provoke where appropriate.  David Fanning
Gramophone January 2017

Always under the shadow of a regime he had to support but privately feared, Shostakovich in Russia took refuge both in tortured private music and ironic public music. The two come together in this ingenious disc, which couples the two extrovert piano concertos with new transcriptions for solo piano of string quartets, including the whole of the Eighth Quartet. ... Pianist and arranger Boris Giltburg gives sharp-edged accounts of the two concertos: the strident First more successful than the jokey Second. Excellent support from trumpeter Rhys Owens and the Liverpool Philharmonic.  Nicholas Kenyon
The Observer 22 January 2017

This recording of Shostakovichs two piano concertos is a delight from start to finish. ... Boris Giltburg and Vasily Petrenko are a tight unit, the pianists dashing virtuosity and subtlety of touch matched by equally incisive interpolations from the orchestra.  Erik Levi (Concerto Choice)
BBC Music Magazine February 2017